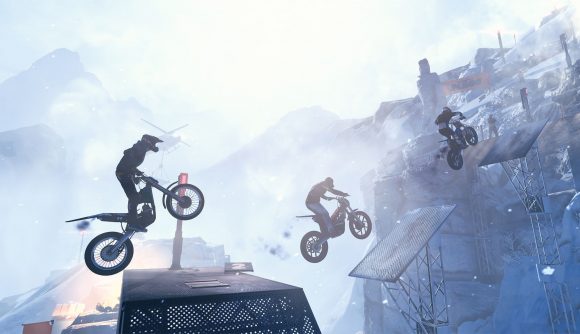 Trials Rising is out tomorrow, for those of you who like your dirt bike racing sims with a touch of physics-based tricksiness. It’s looking pretty good by most accounts – Ben is especially impressed, praising it as “marvellously accomplished” and “both the most accessible and most unforgiving Trials game to date.”

Awarding the game a nine puts us at the upper end of the critical spectrum, but the consensus is definitely positive. Trials Rising is currently sitting on an aggregate score of 81 on OpenCritic – Metacritic doesn’t have a score for the PC version since it doesn’t have enough reviews, but its PlayStation 4 score is also 81.

The only criticisms we’ve seen focus on a grindy XP system and the arrival of loot boxes. They’re cosmetic and optional, but Ben says “their presence adds a slightly bitter aftertaste to what is an otherwise generously spirited game.” It seems that most critics agree the underlying gameplay and track design is up there with the best in the series.

Here are the Trials Rising review scores, plus a gameplay video for you to assess:

On Trials Rising’s loot boxes, Ubisoft has insisted they “aren’t a bad thing if done right” to the widespread, predictable, and pretty understandable outrage of many gamers. It’ll be interesting to see how they’re received when the game goes out to the public.