I first saw End of Nations a couple years ago at the Petroglyph offices in Las Vegas, and the thing that stuck with me was how little of it was really fleshed-out or even understood by its own creators. It would be an MMORTS, but nobody could give me a clear explanation of how that would work. The strongest part of the game seemed to be the teamwork involved in the RTS part of the game, where players adopted distinct roles in order to support one another. But the MMO context seemed troubled.

To hear Executive Produce Scot Lane tell it, that’s one reason why End of Nations has undergone a recent transformation since Trion took the project over. The game itself led them there.

“End of Nations doesn’t really fit nicely into either [the RTS or the MOBA] bucket; it is what we see as the next evolution of the genre,” he said. “We have Hero units and tactical leveling that you find in MOBA’s, but we also have user-controlled units and some of the micro aspects found in RTS games. That being said, the real change we made was from RTS/MMO to more of a tactical MOBA. When we initially played and evaluated the game and went through the mountains of user feedback, it kept pushing us in this direction. The combat worked much better than the MMO aspects so we let the game take us to where we are now.”

One thing that might be getting lost amidst stories of End of Nations’ troubled development, and its massive shift in direction away from the MMO angle of a couple years ago, is that the game itself has enjoyed a lot of continuity. Plans changed around it, but the EoN’s evolution has been natural. Lane told me that a lot of what I saw two years ago remains beneath the surface.

“The game’s foundation remains the same,” Lane said, “in that it builds on the original lore and it still has the same classes, although the classes have been enhanced to fit in better with the distinct roles they play on the battlefield. Some of the heroes will be familiar to you, and the general overall combat gameplay is still there although both have been enhanced. Overall, there is quite a bit you’ll recognize which we’ve improved upon, but you’ll definitely notice new elements, too, which we think you’ll really like.” 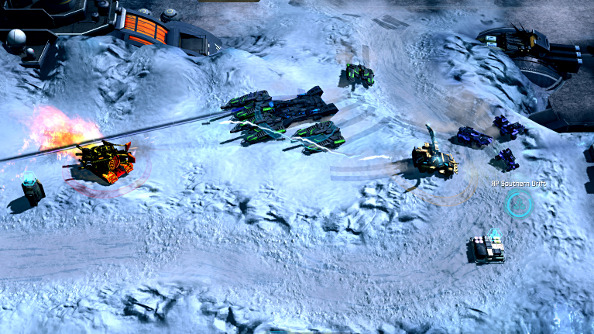 To an extent, I’m actually a little worried that it’s being called a MOBA, if only because that term has become so associated with lane-based, lord management games like Dota 2 and League of Legends. Thinking of those games will give you the wrong idea about End of Nations (currently in alpha), which is an actual cross between MOBAs and RTS games.

Lane emphasized, “We have heroes that have abilities that work similar and we are an arena combat multiplayer game, but the comparison stops there. In End of Nations, you’ll choose which units to bring to the fight and have full control over them in the battle, giving you more control over the tactics used during the map and letting you do more micromanagement, if you choose. Like I said above, this game doesn’t really fit nicely into a genre bucket — which for the record I think is a good thing.”

I asked Lane if he and his team were at all worried about MOBA-fatigue.

“We are not concerned at all, we are rooting for it,” he said. “We are hoping this is the next progression of the genre: more control, faster games, more setup. This was built by fans of both MOBA & RTS genres and our goal is to take other gamers to a place that is somewhat familiar, but that stimulates their senses and gives them something new to explore and master.”