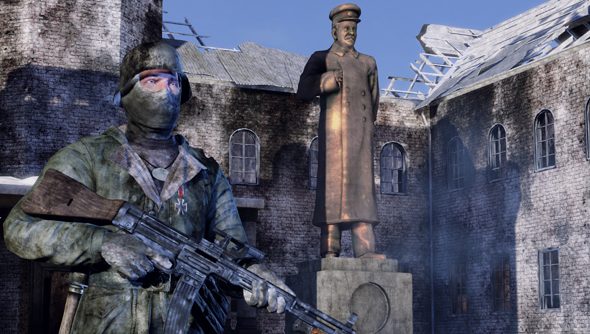 Ba-dap, bap. Ba-dap, bap daaaah, BAP. Sorry: just letting the red orchestra play out before launching into anything so unmelodic as an intro. As you can probably hear, they’re currently playing ‘20s big band numbers. Yesterday’s matinee Red Orchestra 2 giveaway on Steam constituted a terrific overture to a celebration of the wilfully-obtuse shooter that’ll go on playing till the end of the weekend.

Despite the now-constant presence of Steam sales, full-on giveaways of the contemporary games that constitute developers’ livelihoods still seem to make them nervous, for some reason. But Tripwire were convinced this one would be “fun”.

“Valve had a LOT of success with the L4D2 giveaway at Christmas, so we thought we’d see what would happen,” said Wilson. “Hopefully a metric shit-ton of people like it – enough to buy Rising Storm.”

Rising Storm is Red Orchestra 2’s standalone Pacific Front expansion. It’ll be free on Steam for this weekend only – but is accompanied by a hefty discount for the duration.

Wilson added that the concurrent player count for the original Red Orchestra 2 tipped “well over” 20,000 yesterday – more than doubling its previous peak. Were you among that number?