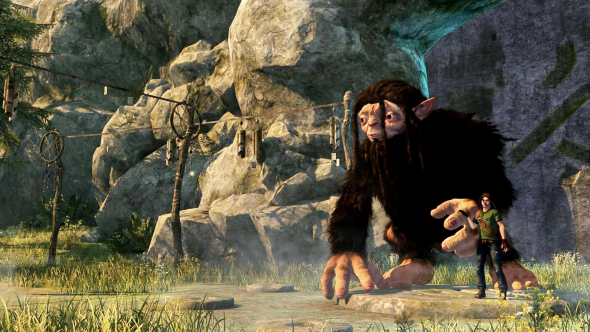 Their names never get mentioned in subreddits or on sites like this one. Occasionally, if they’re lucky, their logos will drift by on a splash screen – a mystery dismissed with a click of the left mouse button. This is the lot of the support studio, brought on for ports and the less glamorous elements of production. Doomed to obscurity. Or perhaps not.

Fancy a spot of crafting? Here are some excellent survival games.

The story of Spiral House is like so many others. Its UK founders tasted success with a game under the auspices of a major publisher. In their case it was the Japanese-style RPG Silver. Look it up: it was reviewed quite positively by a young Erik Wolpaw, no less. From there they set up shop independently with every intention of making Silver 2 – until Infogrames asked if they wanted to port Alone in the Dark 4 to PS2 and PC.

Port work paid. It made sense to do it. And so Silver 2 was put on the back burner.

“When we first started we always wanted to do our own IP,” remembers technical director Bobby Earl. “That was our five-year plan. But you have to pay the bills and keep the wolf from the door, so we kept on taking on other projects.”

“And it just went on and on,” adds creative director Kevin Oxland.

A language-learning tool for the DS. Level design for LittleBigPlanet. A shelved tie-in for a shelved movie. Eyepet-based experiments in augmented reality. A Lord of the Rings demo with Brian Cox as Gandalf, for Infogrames’ license bid against EA (“Guess who won there?”).

Work for hire is a curious and uncelebrated corner of game development that many studios with creative ambitions never quite pull themselves out of. But, 17 years into the five-year plan, that’s what Spiral House are doing. That’s what Troll and I represents. 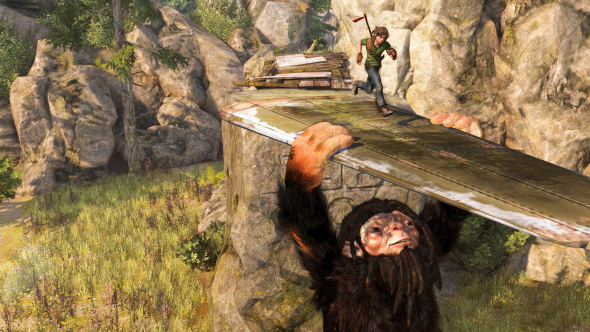 It’s what we’ve always wanted to do,” said the founders. “Let’s just go for it.”

Using funds they’ve accumulated over the years – as well as a custom engine that’s rumbled away beneath nearly two decades of offbeat projects – Spiral House have built ten to 12 hours of third-person adventure, of the kind you might see in a Tomb Raider or Uncharted. They’ve written a story about the friendship of a young, vaguely Scandinavian boy named Otto, and a huge troll with a kind heart and Korn dreads.

All the hallmarks of an Indiana Jones story – or either of his two most prominent gaming prodigies – are here. There’s a touch of the supernatural, courtesy of the rodent-like creatures springing from glowing cracks in the ground around Otto’s mountain home. There are unscrupulous men looking for mysterious artifacts at the behest of a rich benefactor. And there’s a point where, in pursuit of the same treasures for different reasons, these factions clash.

There’s even a cutscene in which, like Lara, Otto grapples with the implications of his first kill, writhing in horror and shouting self-justifications.

This is genre worship, both of ‘80s adventure cinema and third-person action games. Troll and I – especially when played as Otto, and we’ll come to that later – has much mechanically in common with its triple-A peers, integrating stealth as a possible approach in the way contemporary Crystal Dynamics games do.

When Otto hunts down boar for meat to heal his injuries, he does so using a tracking system reminiscent of that in Assassin’s Creed III. Like Lara, he crafts items under pressure, hastily tying spears together as baddies with rifles encroach. And as in everything Ubisoft, those items are made with resources that can be spent in a number of ways and become a valuable commodity.

“Weapon binding [material] is like gold in the game,” notes Oxland. 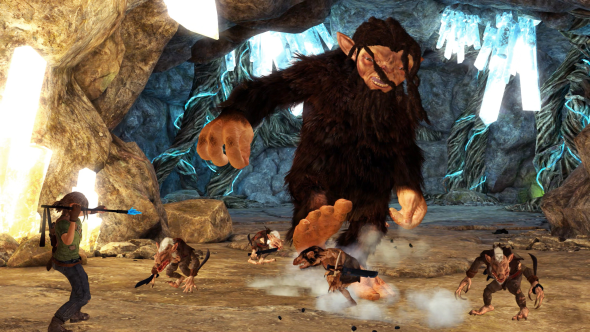 Where Troll and I differs is in the symbiotic relationship at its centre. There’s a whiff on The Last Guardian, in that you’ll work with your somewhat sweet and overlarge companion to solve progress-halting puzzles – recruiting Troll to plug a chasm by holding a plane wing high above his head so that Otto can cross, for instance. But while Trico remains at arm’s length throughout Fumito Ueda’s game, players can switch between control of Otto and Troll at will – or take one each in local co-op.

“We had to be in control of the AI,” says Earl. “What we didn’t want to happen was, while you’re in control of one character, the other character gets battered. Or goes off and completes the game without you.”

It’s a mutually beneficial arrangement, whereby Troll sweeps away swathes of enemies with his big furry arms, and Otto swats away the stragglers that zip around Troll’s feet like annoying flies. Otto can squeeze into crevices, and Troll can carry the both of them over cliff faces using a scaled-up version of Otto’s own climbing system. Very often, Otto clambers onto Troll’s back – a neat mechanical reminder of the decidedly Disney-Pixar themes at work, about asking for help and trusting friends to help you achieve your goals. 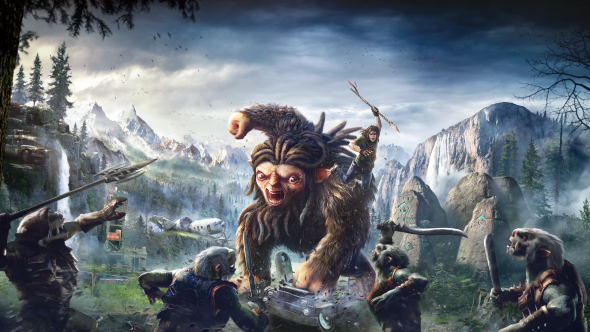 “We wanted you to be able to play it on the couch with your brothers and sisters,” says Oxland, “and not just be for 18+.”

To that end, one thing that Troll and I doesn’t take from Tomb Raider is the impalement.

There are 14 developers working at Spiral House. And while Troll and I boasts wonderfully fluid movement – testament to a full year spent on a vertical slice that began with Otto running around in his gym kit – it doesn’t meet the level of polish set by other games in its genre, made by teams of hundreds.

And yet: why should that genre belong to just two studios who each put out a game once every three years? Why shouldn’t it experiment with dual protagonists, and couch co-op?

“It doesn’t mean we shouldn’t do it,” says Earl, with what sounds like pride. “It would be interesting to go to Naughty Dog and say, ‘How much of Uncharted 4 can you make with 14 people?’”