Tropico is not a quiet Caribbean island where you go to relax. It’s a chaotic place filled with caricatures and tongue-in-cheek political and social crises. It can go from calm to a complete bloody mess quickly, but that fat Swiss bank account makes it all worthwhile.

Despite the Tropican penchant for revolutions, each installment of the city-building series has been more iteration than revolution. In Tropico 5, though, Haemimont Games has shaken out some of the dust and cobwebs, and thrown in several new – sometimes meaty – systems that go towards making it the most distinct game in the franchise. But some of these new features lack the refinement that the series’ mainstays enjoy. 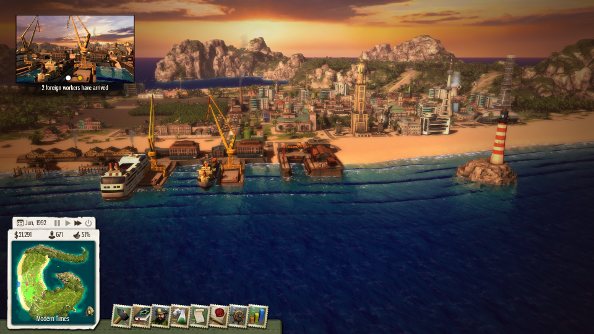 The core of Tropico 5 is much the same as it has always been. In the role of El Presidente, players are given a wild, tropical paradise and tasked with turning it into a thriving city by any means necessary. Farming provides the backbone, flowing into simple industry, and the money generated from trading produce can be invested back into the island in the form of new buildings like schools, entertainment facilities and churches.

But there’s a lot going on behind the scenes to turn a few huts into a modern city. Social engineering, backroom deals, political pandering, assassinations – they are all necessary to ensure that as many Tropicans and foreign superpowers as possible are on the same page as El Presidente.

Not surprisingly, after so many games, the heart of Tropico is a polished, compelling juggling act. The range of social and political edicts, and, of course, buildings, means that there’s always something that can be tweaked to solve a crisis or win an election. Every tweak can help Tropico grow, edging ever closer to the utopian or dystopian city El Presidente envisons.

That song and dance has been going on for 13 years, though. It’s becoming a bit tired. So in comes the Era system, shaking things up in paradise. Tropico 5 is split into four distinct eras that limit what can be built and researched while also informing the goals for the period. 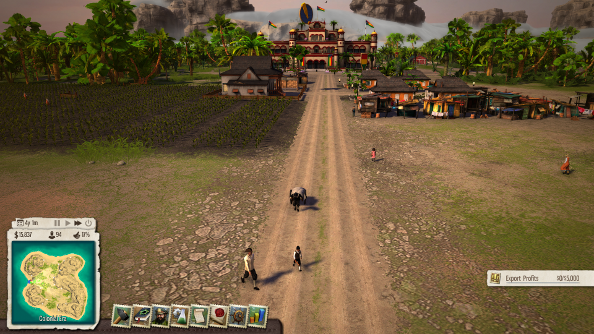 The Colonial Era kicks things off. Gone are the many factions vying for control, leaving two period-appropriate factions behind. As a colony of the Crown, Tropico only has two types of people: royalists and revolutionaries. Royalists obviously want to stick with the rude, demanding Crown, while the revolutionaries want El Presidente to create a self-sustaining colony that can make a bid for independence.

The juggling act that’s at the centre of the series is scaled down to balancing favour with the Crown and the support of the revolutionaries. El Presidente only has a temporary mandate to rule, not long enough to get the rebels’ backing, so some pandering to the powers back home is necessary to get mandate extensions. But not so much pandering that the beret-wearing malcontents feel betrayed. That means calling the King an ant-eater for the entertainment of the revolutionaries one minute, to sending the homeland all of Tropico’s beloved rum the next.

When Tropico becomes independent, it moves into the World Wars Era, which squashes the first and second World Wars into a giant war between the Allies and Axis that spans about three decades. More Tropican factions appear, like the communists and capitalists, while outside influences like the Allies and Axis need to be dealt with through diplomacy, trade and war. As Tropico moves into the Cold War and Modern Times eras, it starts to become more familiar. More buildings are unlocked, the factions from the previous games return, and everything becomes a lot trickier to balance. 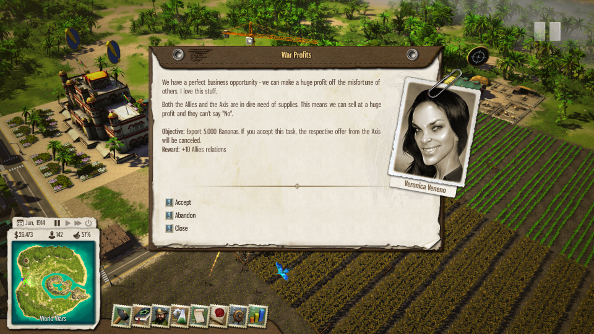 The Era system eases would-be dictators into their roles. Each era up until Modern Times places limits on El Presidente, inspiring a more focused approach to constructing the city. The Colonial Era ensures that the resource gathering groundwork is laid down for the more industrialised World Wars Era, while the missions during the Allies vs. Axis conflict lead players to construct massive manufacturing chains and embark on large scale trading endeavours. These chains provide the profits necessary to create the tourist meccas and economic powerhouses of the later periods, tying everything neatly together.

The campaign creates a few bumps in the otherwise smooth sense of progression. Jumping between different islands, repeating eras and responding to the incessant cries of “El Presidente!” from aides and advisors like snivelling Penultimo or Kane, the shadowy mentor, can get in the way of the simple joys of constructing a tropical paradise or dystopia.

That’s what sandbox mode is for, and it’s undoubtedly the meat of the game. Stuck on one island, El Presidente can guide it from a tiny village into a shining beacon of modernity. And Tropico 5’s sandbox experience is the best in the series, showering dictators in options for 200 years. Tropico can grow into a Communist police state where there’s a soldier on every street and rebels are hunted down and executed, or it can evolve into a trade hub, where behind the rows of docks and ships stand massive, gleaming skyscrapers. 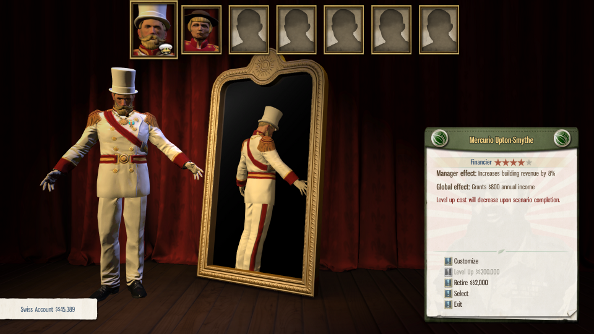 200 years is a long time to lead for, and you could be forgiven for assuming that Tropico 5’s dynasty system was a response to that. El Presidente is the head of a dynasty, and its members can stand for election, manage buildings and be sent on missions. But there are no heirs, no children to shape in an effort to create a perfect dictator. This isn’t Crusader Kings II. El Presidente endures for 200 years. The secret to his eternal youth, or at least immortality, is tyranny.

Members of El Presidente’s dynasty are merely tools. While Tropico 5 is full of larger than life, extremely silly characters, the first family do not number among them. There are not many ways that they can be differentiated visually, either. The character customisation options are rather dire, far weaker than in Tropico 4. While El Presidente’s race can be chosen – as can his or her face, but only from a few options – only the clothing of the dynasty members can be changed.

The one place where character customisation does succeed is the new trait system. Instead of simply picking from a large list, there’s a much smaller one, but each item can be upgraded. The slush fund, El Presidente’s Swiss bank account is used to upgrade the head honcho and the members of their family, and since dynasties can be used across multiple games, there are lots of opportunities to improve them. 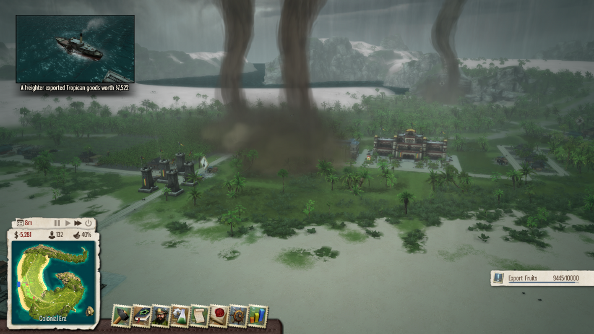 Haemimont has dabbled with some RTS-like elements, unusually, to varying success. Fog of war hides resources, demanding that players explore their island, and in multiplayer it hides other players’ actions. The impetus it gives to exploration and the strategic bump it adds to the series’ first multiplayer mode is welcome, but it also simply looks lovely. It’s actual fog, rolling down the mountains and over the damp rainforests, and when it all vanishes, it makes me a wee bit sad.

Combat, lamentably, is not as deftly handled. Various military buildings can be constructed and upgrades, and they automatically fill up with citizens wanting to join the army or ride a tank. They bumble around doing not very much at all, unless there’s a crisis. Soldiers can be sent in to deal with workers on strike, rebel uprisings or foreign invasions, but it’s all hands off. They just stand there and shoot until one side is dead.

Tropico 5 is really at its best when its doing what the series has always done. Skewering modern politics with parody and letting armchair dictators build a sprawling Caribbean city. It continues to be a pleasure to follow little Tropicans around as they go about their business, discovering the nuances in how the teamsters keep the resource and manufacturing network from collapsing or how to get the most out of construction teams.

Tropico’s complexity, unlike that of SimCity’s, stems from the Tropicans themselves, not balance sheets and graphs. Manipulating different groups and even individuals is the key to success in a banana republic, apparently. And doing so can make one feel like a bit of a bastard. The poor and vulnerable can be pushed to the peripheries, constitutions can be tweaked to ensure only the rich can vote and rebellions can be put down by murdering rebel leaders. For all its colour and caricatures, Tropico often goes to a dark place. 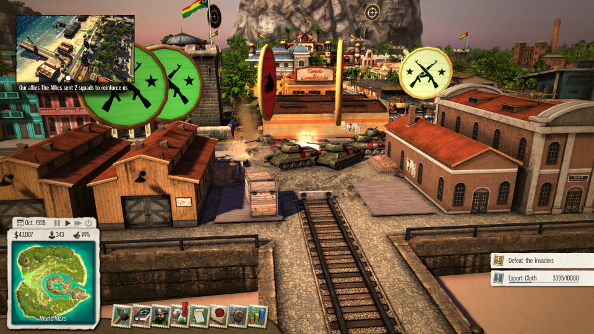 I was, for a time, faced with a particularly annoying rebel infestation. My island had a homeless “problem”, while its wealthiest citizens enjoys a plethora of luxuries and gorgeous mansions. My approval rating was excellent, though, because only the rich could vote. This led to the ostracised part of my city to express their discontent in other ways. Strikes and rebel attacks were becoming common place.

Of course, I could have improved the quality of life and given everyone the vote, but that’s capitulation. I was having none of it. I got the police involved and had them hunt down the rebel leader. It was quite a nasty surprise when I discovered that the leader was in fact now a police officer. So I had to assassinate a police officer. Well, at least I didn’t have to do anything nice.

Tropico 5 makes the myriad systems required to keep a city ticking personal, giving every aspect of the city a human face. That’s what it excels at: giving stats, manufacturing chains and rebellions more meaning by making them the products of individuals. But that’s something the series has always managed to do.

At number 5, we’re still seeing iteration rather than revolution. Everything that’s great about Tropico 5 is built on the same foundation that all the previous games have built on. That’s a solid foundation, of course, but it’s become a bit too familiar. There aren’t any surprises to be found here. But just as familiarity can breed contempt, it can also provide comfort. Returning to Tropico remains a delight, and the drive to plonk down one more hotel, oversee one more year and win yet another election continues to make it the sort of game that can swallow hour after hour.