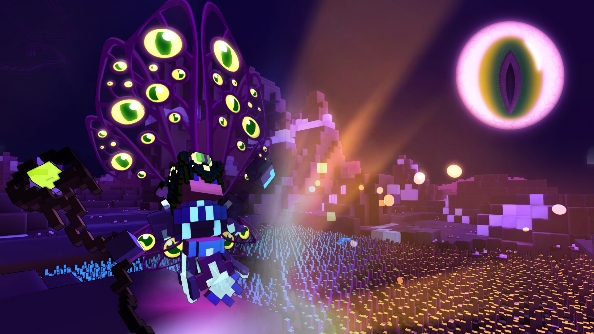 With its colourful palette and character classes such as the ‘Candy Barbarian’, you may be of the opinion that Trove is just a bit too easy for your tastes. And perhaps that was true for a while, but the MMO’s first major expansion – The Mantle of Power – intends to rectify that. Upping the level cap to 30 and introducing a range of ‘Uber’ worlds, Trove players are about to face notably tougher challenges and, naturally, reap even bigger rewards.

Don’t want to spend a penny on games? Try one of the best free PC games.

“We’ve got to a point where players have hit the cap and they’re really hungry for more,” explains Trove’s executive producer Andrew Krausnick on the reasons behind The Mantle of Power’s creation. “They’ve beaten the content we have, which for an MMO is never something we want. Players should always have something more to do.” 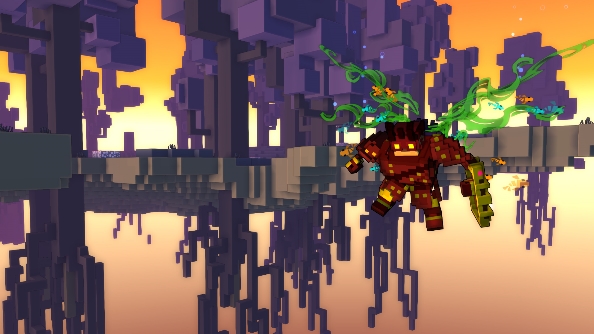 That ‘more’ primarily comes in the form of three new themed worlds based on the elements of air, water, and fire. Accessed from portals in the core hub world, they’re off limits to all but the hardiest of adventurers. Jump through, and you can expect more than just tougher enemies: “We put these worlds behind high level portals because we want you power up to get access to them, but they’re also a bit more difficult to traverse than other worlds,” reveals Krausnick.

And he’s not joking: the fire-themed worlds are flooded with lava, demanding heat-proofed ships to sail between its shores. The air-themed Sky World is made up entirely from floating islands, requiring you to catch on updrafts of wind to successfully travel between land masses without falling to your death. It’s a world where a dragon mount will certainly come in handy.

Speaking of dragons, The Mantle of Power expansion introduces a new class of flying lizard: the Primordial dragon. Available in water, fire, and air varieties, they’re notably difficult to unlock, but offer big bonuses: they provide a 10% boost to your gem power (Mantle’s new stat-buffing items), and have their own nifty abilities.

The air dragon, for example, is the fastest flier in the game, but anyone caught in your backwind can travel at high speed, too. “It’s a good way to be the guy who helps everyone out,” says Krausnick, demonstrating the social value a Primordial dragon has.

Aside from worlds themed around the core three elements, The Mantle of Power introduces a new, significantly different realm: the Shadow World. Desolate, gothically-tinged, and home to some of Trove’s deadliest enemies, it’s not a place for a long vacation. “This world is shockingly dangerous,” details Krausnick. “You want to raid it. You need to get in, kill the enemies, and get back out.”

Within the Shadow World there’s no loot to find, at least in the traditional sense. The only activity to do is complete the quest objective, which provides big rewards. Shadow Colosseum is one such quest, where players must defeat huge creatures in an arena in order to summon a locked loot chest. Each player can unlock the chest, provided they’ve found a key in another world. Enter the Shadow World without a key, and you’re guaranteed to go home empty handed. 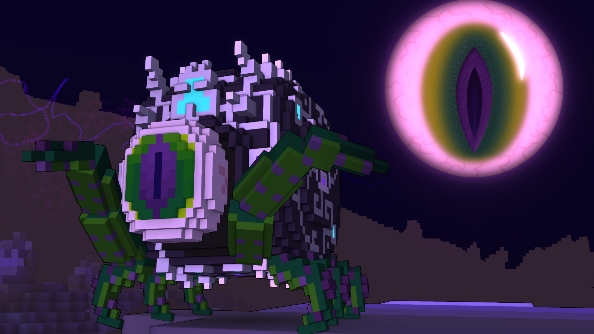 Across all the new worlds, players are going to notice a step-up in the level of detail. “We went back to basics a little bit with our world generation technology. We added something that we’ve been wanting to do for a while which is creating more interesting terrain,” says Krausnick. “It generates more variety. Islands will have shorelines. At the macro level these worlds are far more interesting than before. There are worlds to explore that are really different to the ones players have seen before.”

The new worlds may up the difficulty in the obvious ways, but The Mantle of Power looks to challenge players in other ways, too. Contests offer rewards for players stepping up their game and climbing the leaderboards. Weekly boards track monsters killed, opened loot boxes, and completed quests, and those who manage to hit the top tiers are rewarded. Prizes include items exclusive to Contests, as well as gear typically only available to purchase in the store.

For lapsed Trove players, The Mantle of Power expansion seems the perfect lure. It’s a classic expansion – bigger and tougher – and the likes of Contests should mean there’s less reason to stop logging in again. Players who have bought Head Start passes can play the new content from today, while the expansion goes out to all players on April 26.