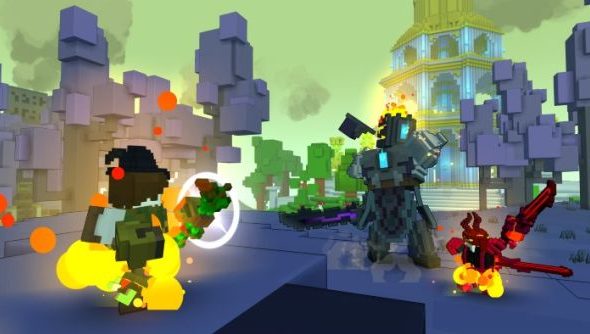 Trove beta players have so far had to make do with bishing, boshing, beating, battering, belting and, in extreme cases, bopping their enemies in the degradable MMO. No longer: the Monster Bash update has landed, bringing badder bosses and stamina-boosting tools to better them with.

Trion Worlds have added every trick in the Big Book of Boss Design to Trove – including turrets, blinding lasers, duplicating enemies, and the slightly lesser-spotted armies of poisonous mushroom men.

To counter all of that, there’s a new class in the boomeranger – a jack-of-all-trades, master-of-all who comes with a helpful bag full of buffs.

New custom flasks are intended to complement all sorts of playstyles, allowing players to fight longer and harder with extra healing options and status effects.

Trion World’s aim is to “turn the challenge up to 11” – which suggests some current players are already maxing out what’s there.

Are you one of those seasoned Trovers? PCGamesN turncoat Julian Benson was very impressed with the alpha in his Trove preview.