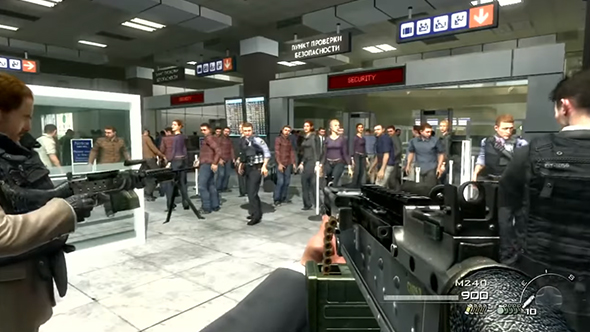 Update, March 8: The White House meeting on videogame violence has taken place, and little of note has come out of it – aside from an 88 second supercut of violent games.

The White House meeting on videogame violence took place earlier today, as US President Donald Trump met with game industry representatives and media watchdogs. Though the meeting itself was closed to the press, remarks from attendees suggest the hour-long event was fairly mundane.

Before the discussion took place, however, a clip showcasing a number of violent games was shown. The video is available on the official White House YouTube channel, and shows a number of violent scenes from games including Fallout, Wolfenstein, Sniper Elite, and Call of Duty. One of the scenes shown was from Modern Warfare 2’s infamous “No Russian” level, where the player – undercover as a terrorist – is able to gun down an airport full of civilians. The clips appear to be to be taken from various YouTube channels.

Melissa Henson of the Parents Television Council said the clips were shocking in a post-meeting press call, according to Rolling Stone. “They started by showing some violent video games and [Trump] was pointing out how violent those scenes were. I think for many of us there, there was a shocked silence. Those from the video game industry were quick to defend [the video games] saying they were meant for a mature audience and that they weren’t intended for kids to see.”

Henson adds that “The tone of the meeting was that it was for information gathering, fact finding. I don’t believe anyone came in there with a policy outcome in mind. The President was not walking in there with his mind already made up. I am under the impression there will be future conversations, though no next steps were discussed.”

A statement from the Electronic Software Association says “We discussed the numerous scientific studies establishing that there is no connection between video games and violence, First Amendment protection of video games, and how our industry’s rating system effectively helps parents make informed entertainment choices. We appreciate the President’s receptive and comprehensive approach to this discussion.”

An official statement from the White House suggests that the meeting is one part of many discussions about how to prevent violent behaviour in US schools. The statement does add, however, that “the President acknowledged some studies have indicated there is a correlation between video game violence and real violence.”

It’s currently unclear whether Jack Thompson managed to attend as he had hoped, but I imagine we would have heard if that were the case.

CNN anchor Jake Tapper has detailed who will Trump’s meeting to “discuss violent video-game exposure and the correlation to aggression and desensitisation in children.”

Expected attendees at POTUS meeting today to “discuss violent video-game exposure and the correlation to aggression and desensitization in children,” per WH pic.twitter.com/6y61gTYZbT

The guestlist includes a number of anti-games voices, including:

The pro-games corner, on the other hand, looks like this:

ZeniMax own Fallout, the Elder Scrolls, Dishonored, Doom, Wolfenstein, and the Evil Within. Take-Two own GTA, Max Payne, Borderlands, Civilization, and XCOM. The ESA are the lobbying group who represent the US games industry, and can count practically every major publisher among their membership.

They will be faced by some of the games industry’s harshest critics, according to the Washington Post. Also attending are Brent Bozell and Republican Missouri representative Vicky Hartzler. Bozell is a conservative Catholic activist who founded the Parents’ Television Council in 1995, whose mission statement is “to protect children and families from graphic sex, violence, and profanity in the media”.

Hartzler is an opponent of gun control, who wrote after the Sandy Hook shooting that “banning guns isn’t the answer to preventing violence any more than banning cars would be the answer” to deaths from car accidents. “The cause, not the tool, should be the focus,” she said, naming violent games as a possible contributor to violent behaviour.

A White House spokeswoman says “this meeting will be the first of many with industry leaders to discuss this important issue.”

If Jack Thompson got invited, we haven’t heard about it yet (see below). We bet he’d love to meet Zelnick.

If you were a videogame fan in the early 2000s, you probably remember the name Jack Thompson. He came to prominence as a critic of obscenity in media, especially sex and violence in videogames, and as an attorney attempted to take legal action against publishers and retailers selling violent games. Thompson largely fell out of the public eye after being disbarred 2009, but with public interest in violent games flaring up again it seems he seeks to make a return. 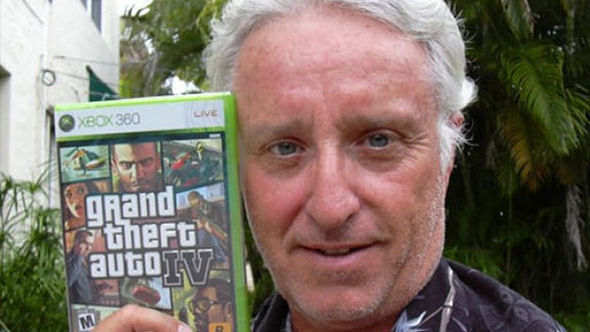 Thompson emailed Kotaku’s Jason Schreier to say he intends to get involved with the White House meeting on violent games scheduled for tomorrow. In the apparently unsolicited email Thompson asks “So, Jason, is Trump going to meet with Mexican drug cartel lords to ask them what to do about the opioid crisis. [sic] I need to be in that meeting, and I’m working on it, trust me. Jack Thompson (yes, THAT Jack Thompson).”

A month ago, Thompson offered to provide assistance in the case of the Marshall County High School shooting in Benton, Kentucky, suggesting a link between violent games and the tragedy. Thompson told the Paducah Sun that “what happens in the case of heavy users of video games is that when they have the virtual reality taken from them, they will set out to make it real reality. They do this without being fully appreciative of what they are about to do.”

Whether Thompson manages to attend the White House meeting remains to be seen, but the ESA has already confirmed their participation. The International Game Developers Association took to Twitter earlier today to protest the idea that games can be linked to real-world violence, instead placing the blame for recent US shootings on the country’s lack of “reasonable gun control measures.”

Update, March 5:US game industry trade association ESA have confirmed that they will attend a White House meeting this Thursday.

Last week, it was announced that US President Donald Trump would meet with representatives of the industry to discuss game violence. Shortly after, members of the ESA – the largest trade association for the game industry in the US – said they’d received no invitations, to which the White House responded they’d be sending invites “soon.” Now it seems those invitations have finally gone out.

According to Kotaku’s Jason Schreier, ESA members have confirmed they will attend the meeting, set for this Thursday. The organization’s comments echo their statement last week. “Videogames are plainly not the issue: entertainment is distributed and consumed globally, but the US has an exponentially higher level of gun violence than any other nation.”

Members of the ESA seemed as puzzled as anyone when the White House announced yesterday that President Donald Trump was set to meet with industry executives in the wake of the school shooting in Parkland, Florida last month.

NBC correspondent Peter Alexander says a White House official tells him that invitations for the meeting have not yet gone out.

UPDATE: WH official tells me invites to video game companies will be going out in the coming days.
So, to be clear:
-WH announces a mtg w video game execs next week
-Video game execs say it’s the first they’re hearing of it
-Now, WH says it’s sending out inviteshttps://t.co/yXyuWyJ22J

Original story, March 2, 2018:US President Donald Trump will meet next week with “members of the videogame industry” to discuss game violence following last month’s school shooting in Parkland, Florida. It’s not clear who in the industry is attending this meeting, and some of the most obvious candidates seem unaware of it.

White House press secretary Sarah Huckabee Sanders announced the meeting in a press briefing yesterday (see video at 6:30), when asked about the president’s policy on guns. This follows Trump’s comments last week that“the level of violence in videogames is shaping young people’s thoughts”, and proposals by a Rhode Island representative to impose a 10% sales tax on M-rated games.

The ESA, the trade association representing the US games industry and which organises E3, told Kotaku that they and their “member companies have not received an invitation to meet with President Trump.” Their members represent most of the world’s biggest games publishers, including EA, Activision-Blizzard, Ubisoft, Bethesda, Epic, Bandai Namco, Square Enix, Take-Two, and many more.

They went on to say that “the same videogames played in the US are played worldwide; however, the level of gun violence is exponentially higher in the US than in other countries. Numerous authorities have examined the scientific record and found there is no link between media content and real-life violence.”