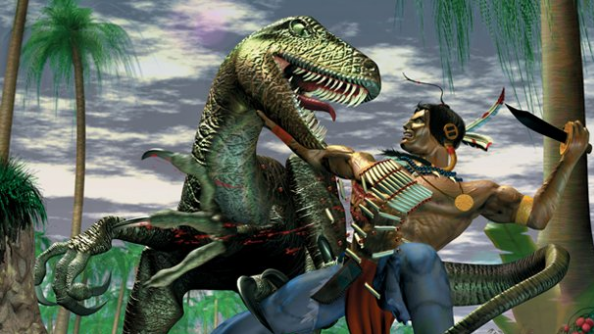 1997’s dinosaur hunting FPS Turok is back on PC. Having spliced its DNA with modern resolutions and upgraded engines, developer Night Dive Studios have resurrected the classic game in a Remastered edition for PC.

Are your tastes skewed towards the modern? Perhaps something from our best shooters on PC list will be more your cup of tea than 90s dino hunts.

The game is a remaster of the PC version of the game, with enhanced visuals and a better draw distanced thanks to being constructed on a new engine. As such it looks exactly as you remember, with the crisp lines and colourful textures of nostalgia, rather than the fuzzy ugliness of reality. These graphical features are accompanied by other new elements, although we’ll have to wait until the game’s December 17th launch to find out what they are.

Night Dive have previously remastered System Shock 1 & 2, The 7th Guest, and I Have no Mouth and I Must Scream, all to solid praise. The studio currently holds the rights to System Shock, and are creating a full, from-the-ground-up remake of the first game. (Not to be confused with System Shock 3, in development by some of the original team over at OtherSide Entertainment.)

The developer has also mentioned in the past that a remaster of Turok 2: Seeds of Evil is on the cards too.