Twin Mirror is Dontnod’s latest game, a psychological thriller that sees investigative journalist Sam Higgs return to his hometown of Basswood, West Virginia to attend his best friend Nick’s funeral. It has all the hallmarks of its genre: the reserved protagonist grappling with dark thoughts, the isolated and rundown old town, a seemingly innocuous death that turns out to be not so. There’s a lot happening in Twin Mirror – sometimes an overwhelming amount. We’re not even through the door before the idea that Nick’s death could be murder is tossed our way by his young daughter.

I’m reminded of Sharp Objects, a book by Gillian Flynn in which a journalist returns to investigate a murder in her hometown. She’s at odds with everyone in the small community, including her own family. She’s also hiding a dark secret, and the mental health issues raised require sensitivity to tackle. Twin Mirror faces a similar challenge: it too has to delicately depict Sam’s mental state, yet it also wants to use it, and near-fantastical abilities derived from it, as a tool to propel the plot. It’s a very fine balancing act that Twin Mirror struggles to achieve.

One of Sam’s abilities is his Mind Palace, a place he describes as being clear and peaceful, although everything we’re shown of it is the complete opposite. It’s a showcase for dizzying, painful memories and a tool we’re required to use to piece together a scene or a series of events.

It’s unclear whether Sam is supposed to be a modern day Sherlock, but if you’re familiar with the fictional detective, the term ‘Mind Palace’ should ring some bells. Sam’s other abilities are familiar as well, from the way he casually observes things that are presented as small text snippets for our reading, to the way he can slow time and make rapid deductions, to the abuse of pills and alcohol. There is one small interaction that feels very similar to Frogwares’ Sherlock Holmes games, in which Sam zooms in and out on a character to deduce whether they may be hiding something – specifically, by noting their sweat as a sign of nerves. This only occurs once, and though it feels like it could be a mechanic it’s introduced too late in the game. It feels a little jarring as a consequence. 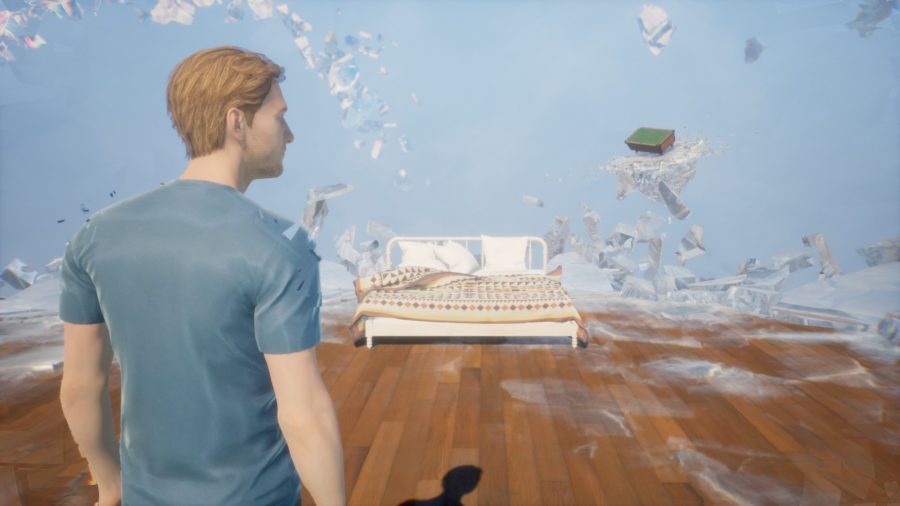 It’s clear that Sam has a remarkable mind and the sense of distrust in himself when he reaches a state of panic is poignant, but the other of Sam’s abilities – a more sociable alter ego known as the Double – alongside his misuse of pills, becomes quite problematic. It appears sporadically throughout the story, seemingly flaring up when Sam’s mind goes on the defence. It’s supposedly an ally to help him through social situations, but typically berates him into listening in uncomfortable moments, all while the people speaking – who are supposed to know him better than anyone – remain completely oblivious. Again, the Double is a tool, and its function is to enable pivotal moments in conversations that develop the story.

This is where Twin Mirror trips over itself. Instead of relying on the strengths of its core mystery, an array of well-crafted characters, and the hauntingly beautiful setting of its deteriorating, intimate town, it leans too heavily on Sam’s quasi-fantastical abilities, which are linked to his mental state. But since neither these nor his mental health are clearly defined, they tend to blur. Sam exhibits symptoms of depression and speaks candidly about his panic attacks. As we see in flashbacks to his childhood and a nightmarish scene in Sam’s mind, he is clearly in pain, and returning to Basswood is dredging up a lot of suppressed emotions.

Even leaving aside questions of accuracy in depicting mental health, Twin Mirror doesn’t leave itself enough room to explore Sam’s mental state thoughtfully, depicting him as living with a number of mental health conditions and as a person for whom logic and social skills are not only mutually exclusive but also a choice. It’s nonsensical and insensitive, and borne of Twin Mirror trying to cover far too much turf in six short hours. 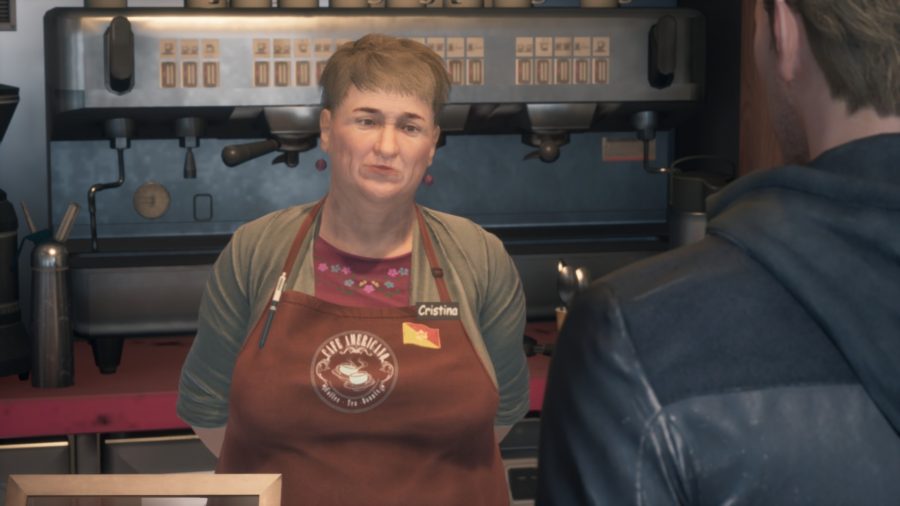 It’s a shame, because without all of this, Twin Mirror would be a solid mystery adventure. A lot of the game involves walking around interacting with clues or gathering information, or talking to Basswood citizens to try and find out what happened after an extremely rough night out on the town. Sam himself can be a bit of an arse, not even just because he is a tiny bit self-serving – he can actually be downright cutting. He chooses to end conversations if they don’t serve him a purpose, and drops barbs like “Tyler’s doing well for himself” about a guy who has a shabby outdoor sofa and is living in a trailer park. Some of his actions throughout the game are also questionable, steamrolling over unassuming side characters as a way to develop his investigation. The game never explores why he acts this way, so we’re left to guess.

Sam is at his best when he isn’t left to his own devices and has the help of old friends and familiar faces around town to solve the crime, although everyone seems to blow hot and cold with Sam and you can’t help but feel sorry for him. You can tell he has good intentions and wants to have more patience with people, and carefully selecting dialogue choices on his behalf feels like walking a precarious tightrope all the way to the finale. The sense of foreboding creates moments that are utterly terrifying – from walking around empty offices, to the more heart-pounding scenes in Sam’s mind. 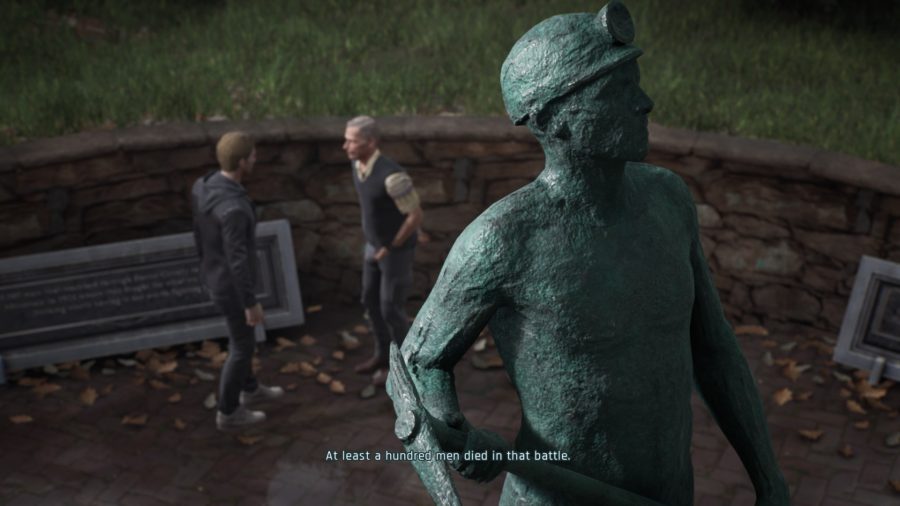 Twin Mirror finds itself in its compelling mystery, secluded sleepy town setting, and Sam’s interactions with all the friends he left behind two years ago. There’s a lot of anger in Basswood towards Sam, and that anger singes Sam’s already fragile state, but there are also sweet moments of resolution as Sam accumulates mementos and has frank, overdue conversations. He drags himself from the cafe, to the drug store, to his late friend’s fishing shack in a beautifully told story that unfolds over one day. It culminates in a confrontation between Sam and the Double which, sadly, can’t help but feel a little abrupt – turns out, a day is just not enough time for Sam to resolve a lifetime of hurt and fully address the complexities of his mental health.

The building tension and well-written characters make this small town mystery captivating, but it bites off more than it can chew in its rushed depiction of a man struggling with his mental health