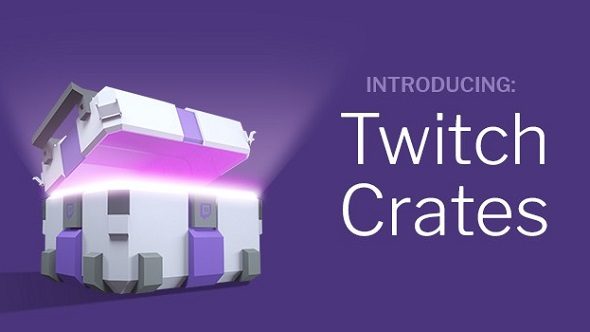 Shown off briefly as part of their Twitch Commerce announcement, Twitch has revealed more about the special Twitch Crates which will be coming as part of its general shop update. Appearing whenever you buy a game or an item worth more than $4.99, these digital loot boxes can contain all sorts of goodies for avid stream watchers.

When Twitch Commerce launches, expect to see some of these great PC games for sale.

Twitch Crates will appear in your Twitch inventory upon buying a game or spending over $4.99 on a single digital item. You can choose to open it up straight away, or you can stash them away for future use. The crates may contain channel badges, emotes or even a surprise stash of Bits to spend.

The badges and emotes range from common to very rare, with certain games even getting special emotes as part of the Crate. So, say if you bought a Ubisoft game and it had a special emote associated with it, you’d would get that as part of your Twitch Crate.

Crates potentially give viewers access to emotes they would otherwise have only accessed by subscribing to a specific channel. It will be interesting to see how Twitch grades emote rarity and what they will do to combat duplicate emotes and badges.

At this time, viewers can get duplicate emotes from a Crate and you are not able to trade them with other users. Adding some element of trading will no doubt spell some sort of illicit emote black market, so it’s best left alone until the system is properly trialled.

Twitch plans to add game discounts, community created items and more to Crates as they develop, so expect more bonuses to appear in future Crates. Do keep in mind that you only get one Crate per purchase, so a $50 game does not get you 10 Crates. There will no doubt be an option to buy Crates by themselves in the future as people get bit by the emote hunting bug, but nothing has been announced as of yet.