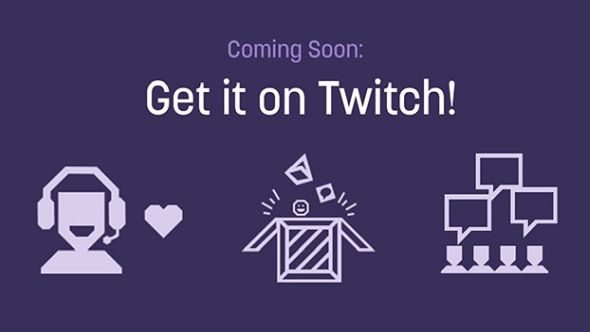 Update April 4, 2017: Twitch have launched their games retail business, in which stream viewers can purchase games directly from Twitch streams. A portion of the sale goes to the streamer, a portion goes to Twitch, and the buyer gets to play a new game from the Twitch app, all while supporting their favourite streamer.

Additionally, if you buy a game of piece of DLC that’s $4.99 or more, you get a Twitch crate – these are stuffed with emotes, badges, and Bits. Payments will come out of your Amazon account.

Which of the best PC games ever do you most watch, rather than play?

At launch, the service supports around 50 titles. None of them are redeemable on Steam, so you have to play them in the Twitch App itself. Some require third-party accounts, such as Ubisoft games requiring uPlay. See the full list here.

Twitch say the best reason to buy through them is to support your favourite streamer. It’ll be interesting to see if this raises any ethical concerns, however. After all, there’s no incentive to be critical at all if you’re constantly trying to sell games during a stream. Check out the full details over on the Twitch blog.

This follows the release of the Twitch desktop app, which offers an alternative to Discord for streamers and stream viewers.

Original Story February 27, 2017: Twitch has taken the inevitable step today of going from simply showing games to selling them. A new program, due to launch in Spring of this year – so soon, in other words – will place buy links to the Twitch store on any streams playing specific games, as well as their directory pages. Partnered streamers will receive a 5% cut whenever anyone buys via their stream, with 25% going to Twitch and 70% to the makers. A Twitch launcher will be used to start these games, or they’ll simply be keys for services like uPlay. No mention of Steam, yet.

It’s a rather guaranteed money-maker for the platform, developers and streamers themselves, so long as they’re partnered. Here’s various folks from Twitch and the involved devs to break it down:

You’ll notice Riot, Valve and Blizzard all missing, who account for a humongous percentage of the most commonly streamed games on Twitch. In-game content is a part of the deal too, so no payday – yet – for CSGO and Dota 2 streamers selling crates.Paradox have confirmed to us that Steam keys won’t be a part of their deal, with everything going through Twitch’s new launcher – we’ll find out if that’s to be the case for others soon.

Buying anything over $4.99 will also land you a new Twitch crate, which is exactly what you think it is – Twitch-flavoured microtrans items, from emotes to bits and whatever else they deem to customise with.

The whole thing should be a huge boon to multi-game streamers, with new game and beta weekend streams having hit huge popularity over the past year, particularly from Ubisoft.