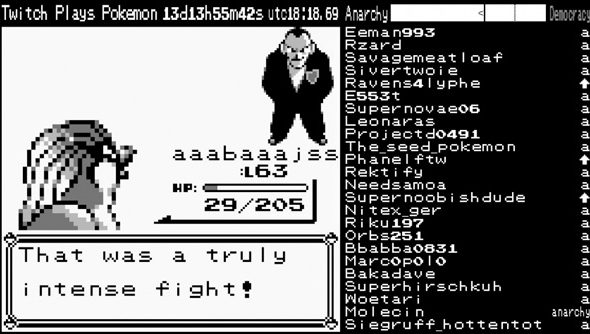 Twitch Plays Pokémon is a massively multiplayer co-operative game of Pokémon, with tens of thousands of players all attempting to control a single character on a magical adventure through the world of Pikachus. It’s an online social experiment that uses a specially modified Game Boy emulator, one that has been adapted to take commands entered into a Twitch livestream and then feeds them into the sixteen year old handheld classic. The result is insane: an unpredictable main character who walks into walls, falls down ledges, flits into and out of his Pokédex and accidentally sets loose one of a kind Pokémon as the unbearable and unceasing roar of infinite voices scream through his beleaguered digital brain.

The cacophony of inputs is very slowly pushing them in the right direction however. They’ve almost completed the game.

Over the course of two weeks, the wisdom of crowds has brute forced Red, the game’s protagonist, towards Victory Road. All that’s left to do now is reach and beat the Elite Four, the game’s toughest Pokémon trainers, who are safely ensconsed on the far side of a sliding boulder puzzle that’s an order of magnitude trickier than an earlier puzzle on which the players had been stuck for two full days.

Can they do it? Probably. If Twitch Plays Pokémon has taught us anything, it’s that seemingly unsurmountable odds can be straightforwardly overcome by a massive crowd of infinitely patient viewers typing commands into a chatbox. One spot in particular, a long and narrow ledge that had to be traversed without asingle player entering a ‘down’ command (which would have sent Red jumping from the ledge, thereby resetting his progress), had at one time been deemed an impenetrable obstacle. Once reached however, the feared ledge was successfully negotiated in just a few hours, which is positively speedy in Twitch Plays Pokémon terms. Nothing is impossible as long as everybody just keeps pressing buttons.

Things move at a glacial pace in Twitch Plays Pokémon and moments of genuine excitement are fleeting. Here are some highlights you may have missed.

The Time They Got Stuck In A Maze 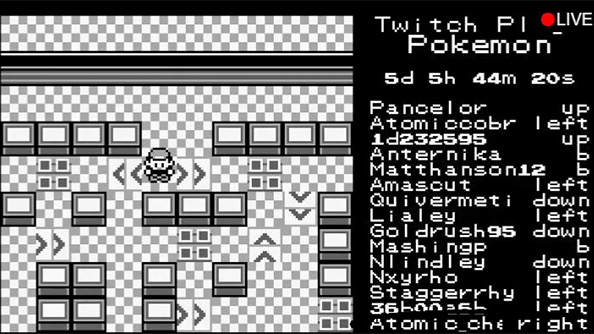 In Team Rocket’s Headquarters there’s a simple maze puzzle designed for simple children. It’s made up of tiles that, when stepped on, send you sliding in a given direction until you hit a solid wall. The idea is to step on the correct tiles to be slid in the correct direction, while avoiding the tiles that slide you back to the beginning of the maze. A bit of trial and error reveals which tiles shouldn’t be stepped on. Tens of thousands of players struggled to navigate this maze and became trapped in slippery hell for two days. In fact, they became so stuck that the project’s anonymous creator paused the stream to implement an entirely new, and highly controversial control method.

The Time They Created A Democracy 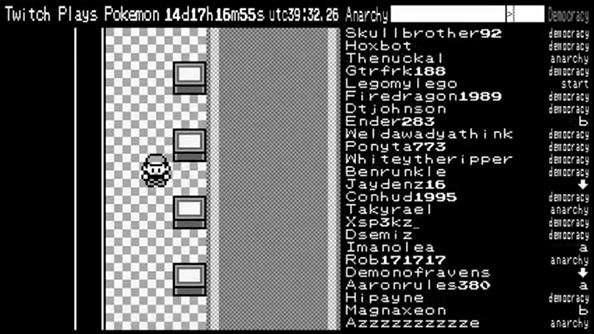 To escape the maze puzzle, a new mode of interpreting inputs was implemented. In Democracy mode, the game would take ten seconds to count up all given commands as ‘votes’, before it would carry out the most voted for command at that moment. The result was a largely troll and mistake-proof means of play, one that was much slower than the old mode (dubbed ‘Anarchy’) but generally more reliable. The problem of accounting for the 20-30 second delay on the livestream remained, but with enough players voting on commands, Democracy mode saw Red out of maze hell.

Now, both Anarchy and Democracy modes co-exist and can themselves be voted into action. Many players disagree with Democracy however, considering it contrary to the inherently anarchic spirit of Twitch Plays Pokémon. In protest players spammed the command ‘start9’, which uselessly hits the start button nine times. So now ‘start9’ is a thing. Memes.

The Time They Beat Giovanni But Then Ran Away 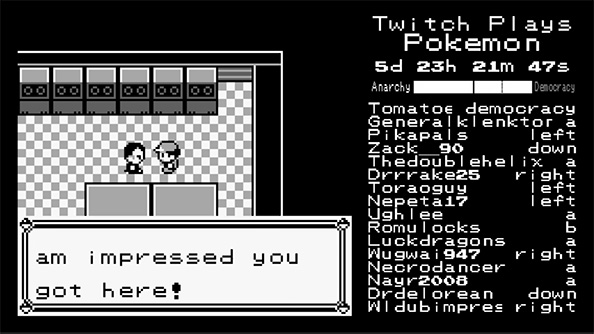 Having spent two days trying to reach an elevator in the Team Rocket Headquarters, Red finally reached Team Rocket bossman Giovanni (who looks a bit like an 8-bit Morrissey in the above picture, I’ve noticed). After leaving and re-entering his office a few times, they fought, lost, made their way back to, fought and finally beat Giovanni in glorious Pokémon battle.

All of this took almost one hundred thousand people several days to achieve, and their reward was the unique item Giovanni dropped at his feet as he fled, the Silph Scope. All the players had to do at this moment was take one step towards the progress-critical item and press A on it to collect it. Instead, in an undoing of their efforts as stunning as it was rapid, they very promptly entered the Pokémon menu, selected Ratata, chose his Dig ability and teleported themselves back to the nearest Pokémon Center.

The Time They Captured A Legendary Electric Bird 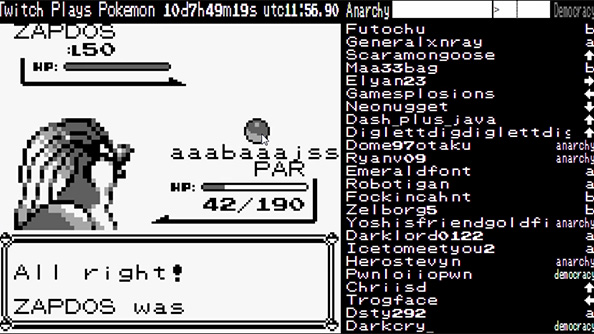 Zapdos! The electric bird! Not only did the players manage tonot use the game’s only Master Ball (a Pokéball with a guaranteed 100% chance to catch whichever Pokémon it’s thrown at) on a Pidgey, but they successfully chucked it at one of the game’s three legendary Pokémon. It was given a nickname on capture, AA-j, a pseudo-random string of characters chosen by a billion un-coordinated fingers. This nickname led to players colloquially referring to Zapdos as ‘Double A Jay’, which is an incredibly satisfying dual reference to both birdsand batteries. A successful day all round.

The Time They Set A Whole Arseload Of Pokémon Free 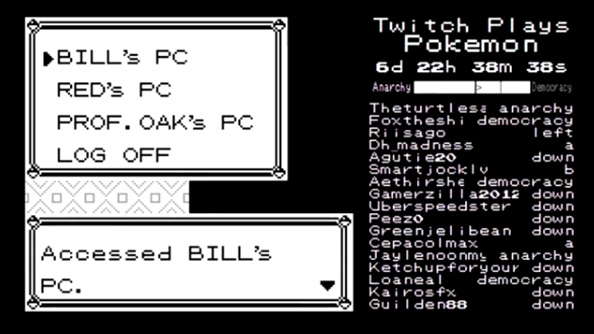 Dubbed ‘Bloody Sunday’, the time the players accidentally freed eleven of their Pokémon is perhaps the darkest moment in the stream’s history. In order to retrieve the recently captured Zapdos, players had to access the PC, a storage box for Pokémon captured while the party is full. Another function of the PC is to allow the player to release captured Pokémon back into the wild, and the commands to do that aren’t entirely dissimilar to the ones required to move Pokémon into your current party.

What followed was a harrowing menu dance as players accidentally released Pokémon after Pokémon in their noble efforts to simply retrieve Zapdos. Thousands watched helplessly as, again and again, a cursor bounced between YES and NO on the final ARE YOU SURE screen, like some pixelated sword of Damocles. Zapdos himself came within one errant button press of being released, but was eventually drafted into the main squad successfully. But at what cost?

The Time They Resurrected God 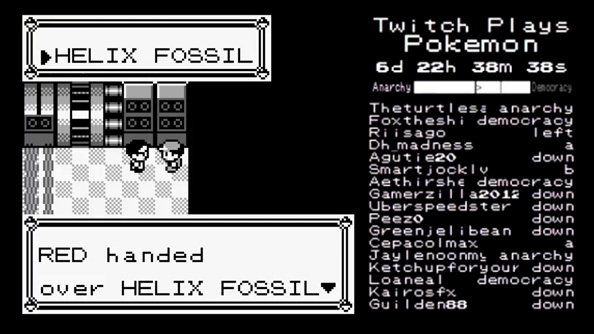 At one point in the game, the players were given the choice to collect one of two fossils: the Helix fossil or the Dome fossil. They chose Helix, and in doing so spawned a sort of pop-up religion. The Helix fossil is one of the few inventory items that cannot be thrown away or used, and so it lived safely on the item screen, protected from the frantic random button presses that discarded or consumed the rest of the contents of Red’s backpack.

This meant that, during fights, the useless Helix fossil would be accidentally selected, prompting a “this cannot be used right now” message that was at first frustrating but eventually oddly reassuring. When lost or in doubt, players would consult the Helix fossil for guidance. And when, improbably, they finally managed to resurrect a Pokémon from the Helix fossil, that Pokémon became revered as a deity. Unbelievers and heretics are said to live under the corrupting influence of the Dome, naturally. Memes.

The Time They Were Stuck Behind This Guy 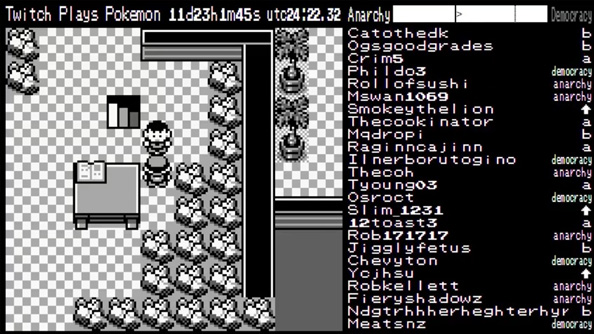 This trainer stepped in front of the player, trapping them in this gap for about half a day.