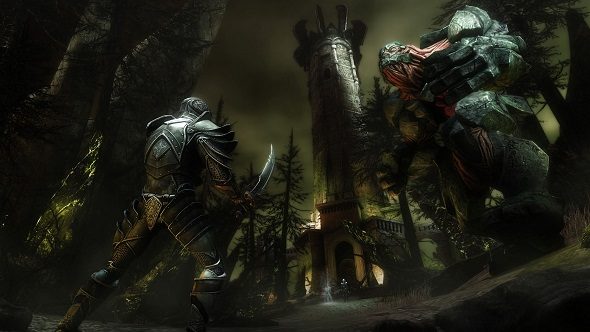 Better late than never I suppose? Originally released in Europe in November of 2010, developer Reality Pump have finally announced a launch date for the Two Worlds 2 expansion, Call of the Tenebrae. Coming out May 25, this DLC will have players battling “against a hideous, ancient evil known as the Tenebrae” and discovering “a powerful secret that will shake the Two Worlds universe to its core.”

For other up-to-date adventures, check out our list of the PC’s best RPGs.

The Call of the Tenebrae expansion was initially scheduled for release in Q2 of last year, with Reality Pump planning to launch the Shattered Embrace DLC later that same year. It seems the developers have simply switched the dates from 2016 to 2017, with Call of the Tenebrae now arriving this coming May and Shattered Embrace scheduled for release sometime in Q4.

It’s not just a story expansion coming with this DLC, as Call of the Tenebrae is promising an update to Two Words 2’s engine, alongside a revamped alchemy system, new armour and weapon enhancement crystals and more. Call of the Tenebrae also introduces a new race called the Chosen to Two Worlds 2, being a grotesque mix of rat and human. You’ll be able to see them in all of their glory, thanks to the graphical upgrade coming with this DLC.

Besides these long-awaited expansions, Reality Pump are currently working on Two Words 3, with it planned for release in 2019. The studio is certainly good at forward planning, I’ll give them that. If you want to familiarise yourself with Two Worlds 2 ahead of May 25, it is available on Steam for $19.99/£14.99.

For those wanting to truly get up to speed with the Two Worlds lore, the original game can be completed in about two minutes and 30 seconds, giving you plenty of time to get stuck into Two Worlds 2.