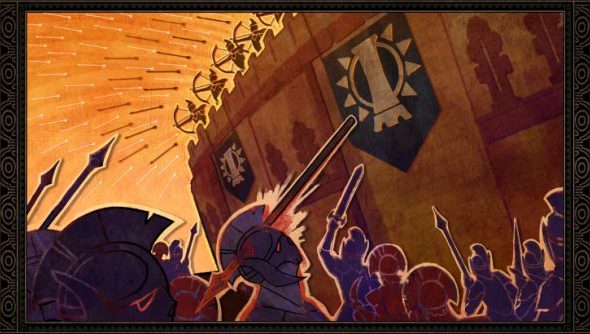 The latest Tyranny dev diary is all about combat and how things have changed since Obsidian’s last RPG, Pillars of Eternity. It’s a similar dice-based system, but some fundamentals have changed. There’s no friendly fire on any difficulty setting, letting you throw off fireballs to your heart’s content. Obsidian are also introducing a Story Mode difficulty setting, which is what was shown off at E3, that lets players mainly experience story rather than combat.

We spoke to Brian Heins about Tyranny at E3.

Of course, if you want it hard, Obsidian are more than willing to provide. “As difficulty increases, we focus more on the AI and tactics of enemies rather than just adding more enemies to each encounter,” explains Brian Heins, game director. “On harder difficulties enemies will choose targets more effectively as well as use their abilities more frequently and strategically. We also replace some weaker units with more challenging ones at higher difficulties.”

Friendly fire, however, will never be active. Heins says that he wanted players to focus on “maximizing their damage to enemies, without worrying about harming their own party members in the process.” Hopefully this also lets them design more interesting encounters and explosive abilities, without having to worry about players accidentally wiping themselves out. Plus chances are if you’re that desperate for it someone will mod it back in.

There’s a bunch more changes detailed in the dev diary, plus more details on exactly how the internal math will work for each and every hit. If you want to see some combat in motion, here’s our video of three ways to handle a Tyranny siege: