If you’ve ever had the unfortunate experience of working as a manager for a large company, you’re already well-versed with Tyranny’s version of evil. At a preview event last week, I had the opportunity to sit down and play through the first few hours of Obsidian Entertainment’s ‘evil has won’ RPG. As the type of person who sometimes gets a kick out of being contrarian, I went into that demo with the purpose of poking holes in Tyranny’s attempts to seduce me to the dark side. If Tyranny wanted me to be bad, I was going to do everything in my power to do just the opposite. I thought it would be funny, but instead it left me feeling depressed. It’s not because Tyranny doesn’t accommodate being good, but because I found myself too weak-willed to choose it.

For more choices and consequences, seek out the best RPGs on PC.

You see, in Tyranny, evil isn’t some otherworldly demon that only wants to cause suffering. Instead, it’s the kind of evil manifested in bureaucracies, ignorance, and ‘the greater good’. It’s the evil of getting to work one morning and finding out that a group of executives you’ve never met have decided it’s now your job to fire several employees. But as an agent in an authoritarian empire, I’m not just handing out severance packages.

Tyranny’s story starts with a grim ultimatum. An army of separatists have congregated in a valley and need to be crushed before their rebellion spreads. The two armies that Kyros, the divine emperor of Tyranny, has sent to end the rebellion aren’t getting the mission done. Instead, their radically different cultures have them squabbling like siblings, and it’s my job to get them to cooperate and complete their objective. Making things worse is Kyros’ passion for deadlines. As a godlike being of immeasurable power, she can issue magical ‘edicts’ that have devastating consequences if not fulfilled. In this case, her armies have eight days to settle their dispute and crush the rebellion or everyone—including me—will die. Now if that’s not a good management tactic, I don’t know what is.

As I arrive in the camp, I’m already dreading the decisions I know I’ll need to make. With such a strict deadline, I’m torn over the best method to get the two factions to play nice. The Disfavored are an elite unit that values discipline and order, while the Scarlet Chorus is a rowdy warband of barbarians that thrive on chaos, but both are equally powerful. While I can simply side with one army and rebuke the other, both generals make it obvious that they’ll make my life hell if I disrespect them. As if it’s not bad enough that I have to settle their disputes, I also need to placate them.

Part of what makes these decisions tough is how incredibly well-realized Tyranny’s world is. The writing and characterizations promise to be some of the finest that Obsidian Entertainment have ever done, and I immediately felt invested in the story. Strangely, I also found myself resenting Tyranny for that exact reason. You see, that investment also lets Tyranny manipulate me in ways that few RPGs ever have. 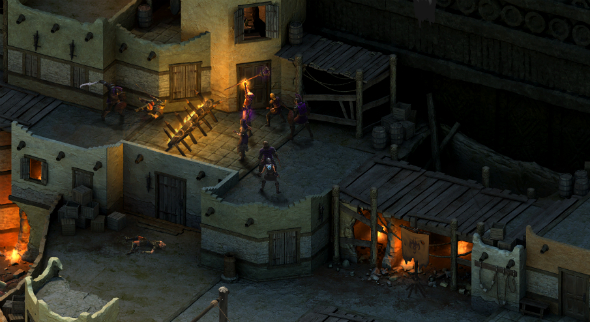 An hour into the demo, I arrive in the Scarlet Chorus camp to offer my aid helping the army get started on our mission to crush the separatists. A captain by the name of Fifth-Eye tells me that their progress is stalled by a pesky band of rebels in the nearby mountains. Fortunately, a recently captured prisoner might have some information that will lead to the rebel’s camp, allowing me to take them out and free up the Scarlet Chorus to move into the valley. And this is where I began to realize that being good in Tyranny isn’t easy.

I find the prisoner strapped to a pole in the center of camp. Beaten and broken by her captors, she’s immediately willing to spill her secrets in exchange for her life. But as I question her, I realize that she isn’t telling the truth. Using one of Tyranny’s dialogue skill checks, I’m able to call her bluff and reveal her lies. Her facade crumbles and she begins begging for her life, and, wanting to be a good person, I take pity on her.

But Fifth-Eye isn’t moved by her pleas. To him, her attempt to deceive us is a crime punishable by death. I stop him, but realize then the predicament that Tyranny has put me in. If I override Fifth-Eye’s authority in front of his soldiers, that would harm my relationship with the Scarlet Chorus and jeopardize our mission. Even worse, Fifth-Eye’s aggressive nature has me worried he might be dumb enough to fight me. But if I standby and let him kill this prisoner, wouldn’t I be complicit in this woman’s death? 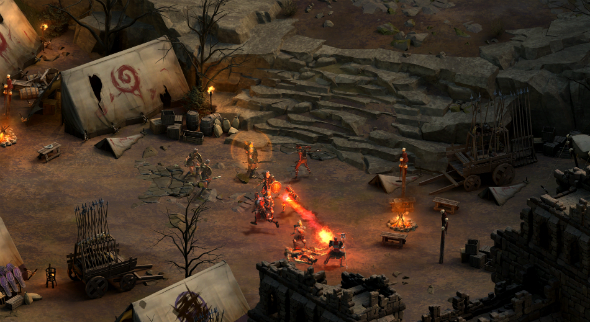 I manage to convince Fifth-Eye that there’s another option. The Scarlet Chorus has a reputation for absorbing the armies they defeat into their own ranks, and I urge him to let this woman decide her own fate by taking on a rite of initiation. For a moment, I feel proud that I managed to solve the problem without bloodshed. But then it’s revealed that her initiation means savagely murdering her fellow prisoners with nothing but a rock. After all, she needs to prove she’s loyal to her new masters.

It’s here that Tyranny’s treatment of morality resonates with me in a way that few games ever have. In most RPGs, good and evil are simple choices that have simple consequences. But Tyranny’s choices don’t fit neatly into my preconceived notions of right and wrong, and I’m left feeling conflicted and bitter. For a person who is supposed to have a great deal of respect and authority, I realize I have none at all.

Reading the grotesque lines of text describing a woman smashing her friends’ skulls in with a rock while, all around me, Scarlet Chorus soldiers watch unflinchingly, I realize that I am a stranger in a strange land. I wanted to be good in Tyranny, to defy its expectations of me as the player, but one hour into the demo and I’m already responsible for a tragedy because I didn’t have the guts to stand up for what I thought was right. I compromised for “the greater good.” But I don’t feel great, and I certainly don’t feel good. 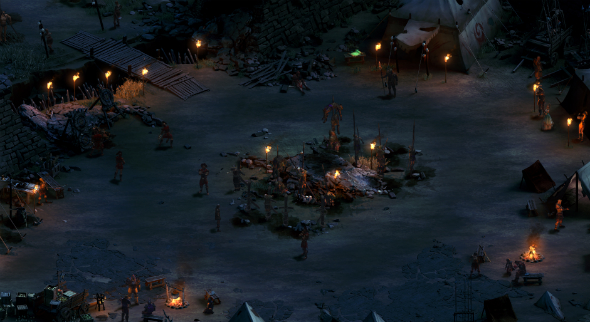 Being good in Tyranny doesn’t mean simply picking the blue coloured dialogue option. It means defying the cultural norms of a society you’re invested in and jeopardizing lives and objectives. It means putting yourself at risk. My instinct to acquiesce to that pressure is what depresses me as the evening ends and I return home.

When our moral compass points to absolutes, we’re forced to make decisions that can negatively impact not just our own lives but the lives of the people around us. But at what point does that pressure begin to bend the compass needle? Even though I can’t wait to play more, Tyranny’s take on evil troubles me because it mirrors reality alarmingly well. When you sit down to play a fantasy RPG, the last thing you expect is to be reminded of the issues plaguing the real world. In that sense, Tyranny might just end up being the most politically relevant game of this year. Not because it has an agenda to push but because it has a disturbing understanding of the concessions we’re willing to make when standing up for what’s right demands sacrifices. Like a beloved relative spouting racial slurs while we quietly avert our eyes and say nothing, doing the right thing in Tyranny is complicated.