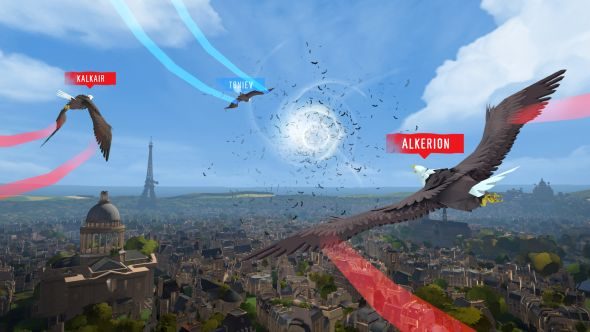 Ubisoft are doing Gamescom in bursts this go round. Yesterday they released twenty trailers at once, because why not, and today is a release date bonanza. Their first batch of VR games will be getting public releases October, November and December, depending on game and platform. These are the Eagle Flight bird-simulator, the nerd-happiness-maker Star Trek: Bridge Crew and social game Werewolves Within.

We talked to one of the Oculus founders about turning around Oculus Rift’s launch.

Strap in, here’s the info:

So if you’re VR-laden, you’re going to have a busy December. Of these three, the one I haven’t seen much of is Werewolves Within, which brings the popular social game Werewolf into VR. It essentially involves a group of people acting as an easily misinformed lynch mob, trying to work out which of their number are the werewolves, while the werewolves try to get everyone else killed. I will have you know I was a champion at it in my teenage drama group. Here’s a trailer:

Any of these take your fancy, or seem good enough to be worth picking up a VR machine for? If you’re less keen, here’s Phil’s piece on exactly why VR will fail.