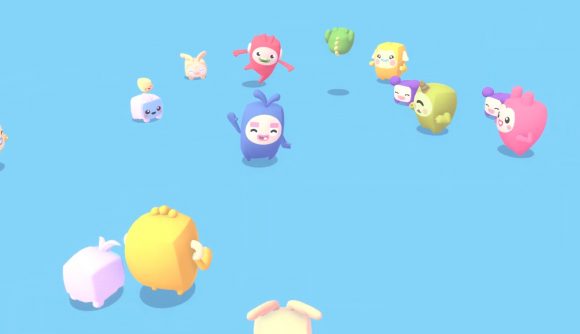 Melbits Pod, an interactive virtual pet system that connects with mobile devices, is the first-ever winner of the EuroPlay video game contest. The final round of judging saw games like Junkfish’s Monstrum 2, Going Medieval, and The Falconeer competing for the top prize, but in the end it was Spain’s Melbot Studios that walked away with the prize.

Melbits Pod isn’t available on PC – instead, it’s a system that pairs an egg-shaped device with an app on your mobile device. You’ll find and incubate special Melbit eggs using the toy, which you’ll then hatch and interact with on your phone or tablet. Different kinds of Melbits can be found by taking the egg device to different places in your surroundings – for instance, some Melbits can only be found in cold places, and so placing the device in your refrigerator might be the way to catch one.

Organised by UKIE, the EuroPlay games contest is meant to be a kind of Eurovision for videogames, and the entries showcased some of the top independent development talent in Europe. Monstrum 2 developer Team Junkfish represented the United Kingdom after winning the UK Game of the Show competition earlier this week.

Naturally, the creators of Melbits Pod were thrilled with the win.

You can find out more about Melbits Pod over at the official site. You can also find more about the best indie games on PC by clicking that link. Congrats to Melbits Pod, and to all the nominees who participated – indie gaming has never looked better.