The video games spectator event of the year, Evo, is coming to a close tonight. After two days of fierce competition, over 6800 players have been whittled down to just five top 8s in Guilty Gear Xrd -SIGN-, Mortal Kombat X, Super Smash Bros. Melee, Ultimate Marvel vs. Capcom 3 and Ultra Street Fighter 4. That’s not to mention the four other games that have already run their course or the legions of off-stream, unofficial side tournaments for everything you’ve heard of any tonnes you haven’t.

You’ll be able to watch the stream here at 9am PDT / 5pm BST: 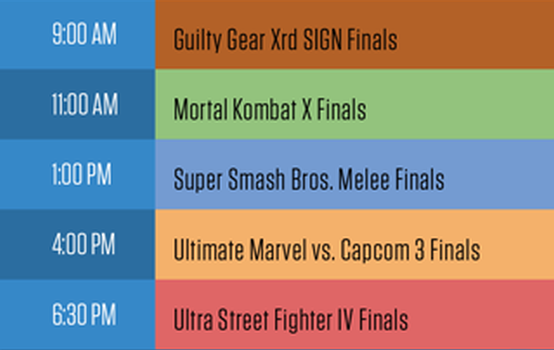 If you’re wondering “come on, it can’t be THAT exciting” well, here’s what you missed last night:

The top 8 for Street Fighter is looking … I was going to say the best it has in years, but it always looks incredible, so we’ll go with “unmissable”. Expect an incredible amount of home support for the two American-based players in losers bracket PR Balrog and NuckleDu, who play Balrog and Guile/Decapre respectively. Balrog will be going up against Nemo, a japanese player on xyz. Nuckledu is taking on Gamerbee, who is known for his Adon but has been making significant strides with Elena in this tournament.

Meanwhile on winner’s side Momochi’s Ken is going up against Tokido’s Akuma. Both players are ludicrously good with long, long histories of tournament wins. Momochi is the reigning Capcom Pro Tour winner (Capcom’s year-long championship series which culminates in the Capcom Cup during winter) while Tokido has been playing and winning with Akuma longer than I’ve been watching the game. The other two players in winners are Infiltration, who spent 2012-2013 basically never losing with Akuma but has since switched to mainly Decapre, and aiai, a relatively unknown player who has been destroying this tournament as Juri.

In the other games, Marvel has a surprisingly unknown top 8 not featuring any of the ‘gods’ of the game. Melee is the opposite story, with its top 8 being highly predictable, although Mango and Leffen both being in loser’s bracket is a big surprise – Melee is the sort of game where the best players are on top for years at a time and will only lose to each other. It will be interesting to see how newcomer Mortal Kombat X does, while Guilty Gear has big shoes to fill with the rotating ‘anime game’ slot on Sunday having proved massively entertaining in recent years.

If you can’t follow on with the stream itself or want to see where your favourite players dropped out, have a look at Shoryuken.com.