Zombies (or ‘reanimated corpses’, as is the politically correct term) are so ubiquitous throughout pop culture that they’re at the stage of needing constant reimagining; running zombies, sentient zombies, fungal-faced mushroom people that aren’t called zombies but essentially are. We truly are in the post-zombie era…

But somewhere where the walking dead are yet to shamble is competitive online shooters. Co-op, sure, but what happens when you make them the centrepiece of an online shooter vying to be treated as a serious eSport?

It’s a question that Capcom is trying to provide the answer to. 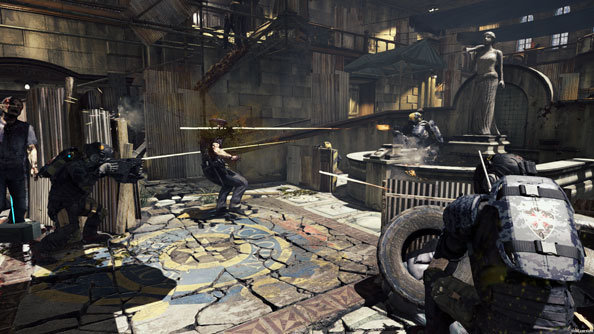 Umbrella Corps is a 3-vs-3 online shooter spinning way off from the Resident Evil universe. The story goes that two teams of evil corporate mercenaries (ugh) battle to get their hands on the precious bio-weapon research of the collapsed Umbrella Corporation. What this loosely translates to is shooting the hell out of each other in iconic locales from the Resident Evil series – which in my playtime included the village from Resident Evil 4, the burning streets of Raccoon City, and the grand lobby of the police station from Resi 2.

The secret sauce in all of this is the omnipresence of zombies – shuffling and crawling and flying (bloody bastard crows) about all the levels. They’re not only obstacles, but the currency of Umbrella Corps, the focal point for the action, and one of the few reminders that this is set in the Resident Evil universe.

I played four multiplayer maps in multi-mission mode – made up of several quick-fire rounds that largely revolve around re-deading the undead. One of the modes requires you to collect DNA samples, achieved by killing them and picking up the glowing purple vials they drop. Another mode spawns a super-zombie that both teams are looking to be first to kill. Even the modes where you try to kill a designated VIP on the enemy team or simple deathmatches inevitably make the zombies a wildcard that can turn a game on its head. 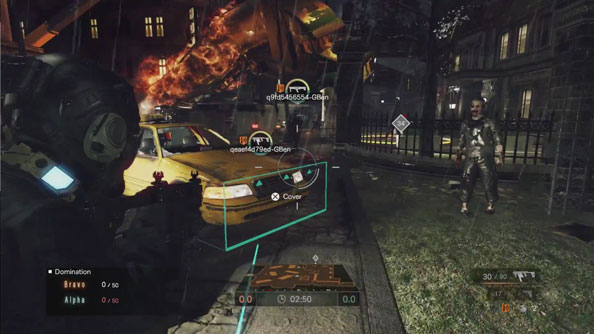 At one point, my team was on the brink of defeat in a game of Briefcase Wankers Collector on the Resi 4 Village map, where the teams compete to collect all five briefcases on the level, then hold onto them for a short period of time. I was chasing the guy with the briefcases, but with a few seconds left in the game my shotgun and I almost certainly weren’t going to catch him. Suddenly, a trusty axe-wielding villager hacked him down, allowing me to jump in and snap up the goods for the win.

In another comical incident, I could see the red outline of the enemy VIP, hiding in a vent beneath the level, when it suddenly vanished and the game announced he was dead. Going down there, I discovered that a zombie had crawled into the vent after him and snuck up without him realising.

They make for some golden moments, those pesky zombies, forcing you and other player to be aware of far more than just the objectives and guys in gas masks pointing guns at you. But I couldn’t help but feel that the zombies are filling certain shortcomings in character and gameplay that Umbrella Corps badly needs. 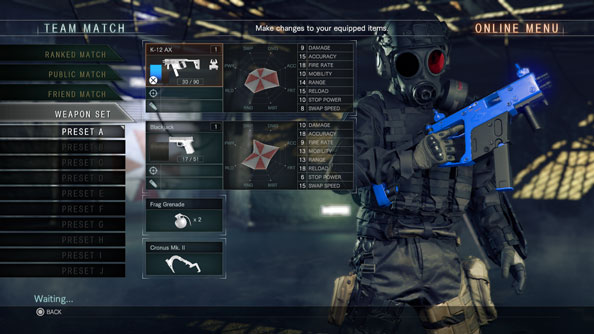 Mechanically, the game has that trademark Resident Evil stiffness, which works well for inducing panic in a horror game, but doesn’t feel right in an otherwise fast-paced online shooter. There’s currently a long delay in bringing up the ironsights of a gun, and shootouts feel inaccurate and clumsy, with the poor zombies often taking bullets meant for your enemies. I never quite got to grips with the cover mechanics either, which highlight bits of wall you can hunker down behind but don’t always seem that responsive in getting you from cover to cover.

The maps tease the nostalgia card, with the zombies on each one being befitting of their setting – so ‘Ganados’ villagers in the Village, dogs and urban zombies at the police station, and the African shanty town map from Resident Evil 5 stays true to its controversial roots by being populated with impoverished African folk (but let’s not reopen the old ‘Racist-dent Evil’ can of worms now…). Each type of enemy has its quirks, so the more sentient Ganados will take less kindly to being used as shields than zombies, and add a little colour to the levels. Design-wise however, not much stood out to me in my 15 minutes or so with each map. There were few discernible choke points, sniper spots or convenient last-stand locations – all features that are crucial to the ebb and flow of an online shooter.

There are hints of good ideas here. The Zombie Jammer, for example, makes you invisible to zombies, giving you an edge over your vulnerable enemies. You can also use the undead as sort-of-human shields. But there needs to be more of this exploitation – manipulating the zombies to side with your team, for example, or asymmetric multiplayer modes in which players become reanimated once they die. The zombies are the key to spicing up the gameplay in the future, because God knows those mercenary thugs you play as – with their gas masks, generic weapons and mundane customisations (consisting mostly of different varieties of gas mask, or the faces of famous series characters if you get the DLC) aren’t going to do it. 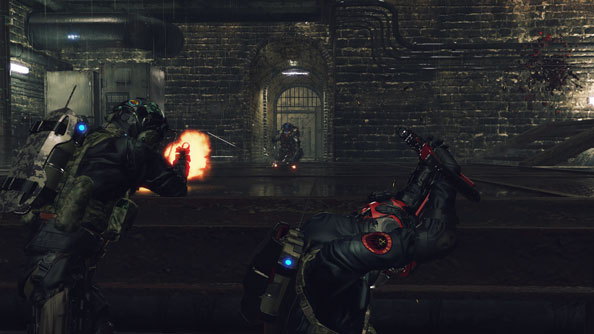 Umbrella Corps is strange and dangerous new territory for Capcom. The main Resident Evil series has been wayward for some time now, struggling to find a clear identity since the excellent Resident Evil 4 tore it away from its survival horror roots in favour of action-horror. Subsequent games in the series suggested that Capcom never quite mastered what a modern shooty-shooty game should feel like, yet now it’s creating one in a genre where precision, responsiveness and pinpoint mechanics are more crucial than ever.

What I’d like to see for Umbrella Corps is that, as the game evolves (as any great online shooter should), Capcom pares back its eSports ambitions and shifts this into an online shooter with the schlocky, B-movie spirit of the Resident Evil series; asymmetric game modes where one player controls the Nemesis beast, William Birkin, or other iconic villains, ‘hero’ characters from the series like Albert Wesker and Barry Burton (quipping about ‘Jill Sandwiches’), and more imaginative uses for those zombies pottering about.

There is hope for Umbrella Corps, but Capcom would do well to re-evaluate their goals, leaning more on fan service and targeting the more casual audience as it familiarises itself with how to craft the maps and mechanics worthy of an eSport shooter. This is a game that needs to learn to walk before it can run, whereas currently it’s still shuffling like those zombies it’s so fond of…