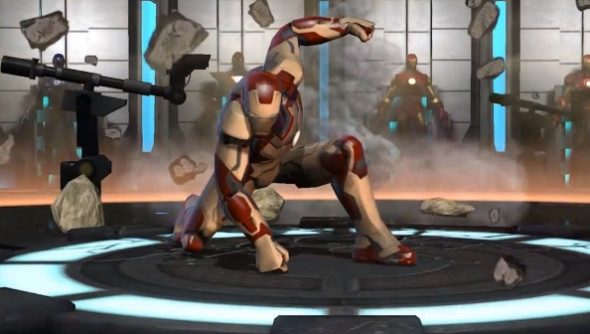 Last month Gazillion Entertainment pushed Marvel Heroes into a new realm of decimals with Game Update 2.0, and asked players to scrap their way over a Rainbow Road-like bridge in a massive cross-server event. The community made it across – which was a relief to Gazillion, who’d built the entirely of Asgard on the other side and would’ve felt pretty silly if nobody’d seen it.

Today brings 2.1, and a series of “enormous” new battle zones dotted about the great Norse city. Oh! And a Ghost Rider free from the wilting influence of Nic Cage.

Ghost Rider is a playable hero, the latest in Heroes’ growing roster of interchangeable (meaning swapped in an instant, not one-note) fan-favourite characters. He has his bike, naturally, and the chains, and the hellfire:

Gazillion are making a concerted effort to link their ongoing Brian Michael Bendis-penned plotline to the current rush of Marvel movies – and so Ghost Rider will be employed as a tool against the machinations of the Dark Elf Malekith, As Seen in Thor 2.

Malekith brings those machinations straight to Asgard in this update, turning part of the city into a huge public combat zone. New mobs include Kronan and rock trolls. Head to Odin’s Throne Room, meanwhile, to face off against Loki in a multi-stage boss fight.

We’ve still got 200 licenses to be Loki in Marvel Heroes, incidentally. I’m not clear on whether he’s useable in the fight against himself – but that’d hardly be new ground for Marvel, would it?