Forget the mail drones. Somebody – let’s call them Amazoogle – has invented the ultimate parcel service: self-delivering cardboard boxes. Physics-enabled cubes, capable of hurling themselves across long distances, devastating the destructible environments around them. Cardboard boxes with uselessly flailing legs, propelling themselves around oil rigs and tropical islands and arctic tundra.

That’s Unbox: a local multiplayer party game in the spirit of Mario Kart, Goldeneye and the like.

‘Twas the night, or a few days, before Christmas – and the team at Manchester’s Prospect Games decided to stick around for the weekend to take part in the monthly Unreal Engine game jam.

The jam’s theme was a question: what’s in the box?

Rather than channel Molyneux with a cube-tapping mystery, Prospect chose to answer a different question: what’s the box doing? Within a few hours, lead designer Jack Bognar had a prototype. His cardboard protagonist rolled around, unpacked itself, and stacked its contents into big, wobbling towers.

“It’s been very, very iterative,” said Bennison. “At the beginning of the project, it was like every single day something new was happening, the direction was changing a little.” 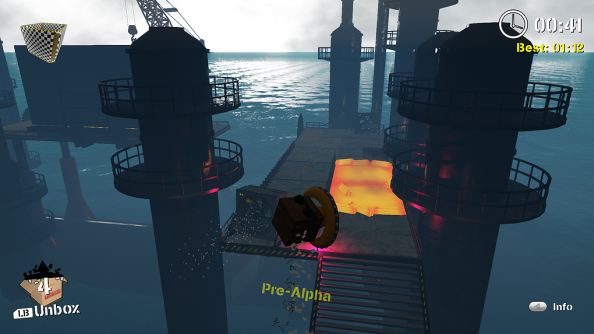 Three days in, they had the makings of Unbox – a communal couch game in which every player hurtles about, exploding out of themselves, double-jumping to their destination.

“From there we were like, well, why are they doing this?,” said Bennison. “Are they trying to deliver themselves? Sure, okay.”

Months down the line, Prospect would now file Unbox alongside games like Gang Beasts and Samurai Gunn – in the “very competitive, yet silly, physics-y” genre. Certainly, the simple joy of watching physics objects collide and crumple is apparent in its trailer – which sees boxes pulled off-course by chains and hoisted into the air by balloons.

“You don’t have to aim at people,” said Bennison of Unbox’s weapons system. “You just have to look at them, fire, and something funny will happen.”

But there’s also the accidental influence of games like Banjo-Kazooie and Mario Kart. Unbox is platformer, shooter, and racer. 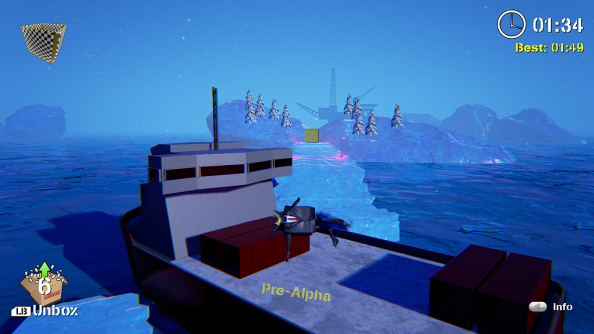 “It’s this weird hybrid of everything we’ve enjoyed throughout our gaming lives,” explained Bennison.

The level design originally emulated Super Monkey Ball and Marble Blast – but as the idea of an international logistics service came together, Prospect decided to open up their environments, focusing on recognisably real-world locations rather than abstract tracks.

Hazards now come in the form of crushers, flamethrowers, wrecking balls, and the ocean itself (“Cardboard boxes don’t fare well submerged in water. Water’s everywhere in this game”).

Traditional multiplayer modes don’t really have a place here. King of the Hill, when Prospect tried it, “sucked”.

“Once you’re in the hill, if players don’t have weapons, they’re just sat their looking at each other,” said Bennison.

What suits Unbox best are dynamic, constantly-moving game types: Thief, where players scramble for each others’ spilt coins; Collect, which sends them after randomly-spawning batches of tape; and Boxing, a kind of deathmatch. But he most popular by far is Delivery – which plonks players on one side of a map and asks them reach another – while “trying not to get blown up too much” in the middle. 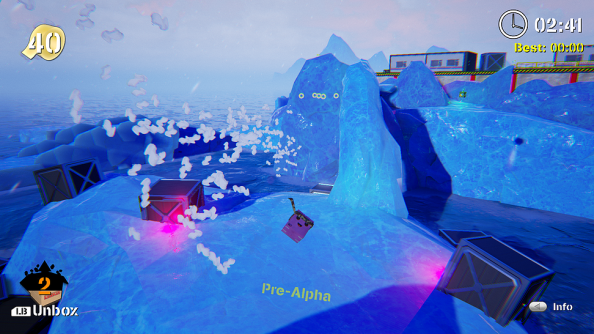 Weapons can help as well as hinder. If a fired ball and chain connects with a player, it can send them spinning off in a random direction – possibly towards the objective. And the balloons that sometimes cause boxes to float away from their goal might instead save a player down to their last life from tumbling into the water. That element of randomisation means you’re never entirely sure what’s going to happen when you shoot.

“We were trying to introduce a lot more physics-oriented things,” said Bennison. “Just because we have access to those tools through the Unreal Engine.”

When Prospect have coded in C++ in the past, it was out of “necessity” – the indie studio is composed mostly of designers. In Unreal Engine 4, they’ve been able to get Unbox working almost entirely in Blueprint, the scripting tool designed for non-programmers.

“We were blown away by how easy it was to adapt to,” said Bennison. “This team has unbelievably quickly been able pull all these random, weird threads together and create this coherent vision. We’ve got all these genres, all these ideas, that six months ago didn’t exist.” 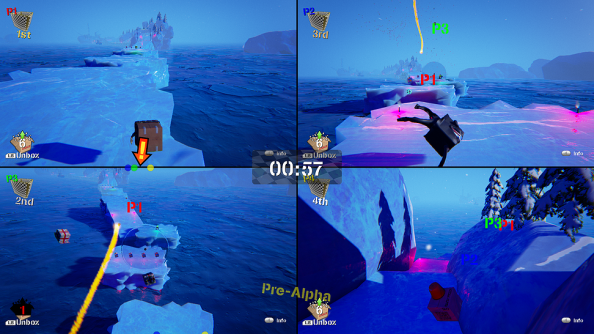 As with Molyneux’s box experiment, the first feeling Unbox elicits from its players is curiosity. But then, it all clicks. And it’s chaos.

“Because of that destructibility and the physics, the fact that you don’t know what’s going to happen, there’s lots of ‘aaah!’ moments,” said Bennison.

“It then very much becomes your Goldeneye, Super Mario Kart – people on the couch screaming at each other.”

Unbox is in the works for PC. Unreal Engine 4 development is now free.

In this sponsored series, we’re looking at how game developers are taking advantage of Unreal Engine 4 to create a new generation of PC games. With thanks to Epic Games and Prospect Games.