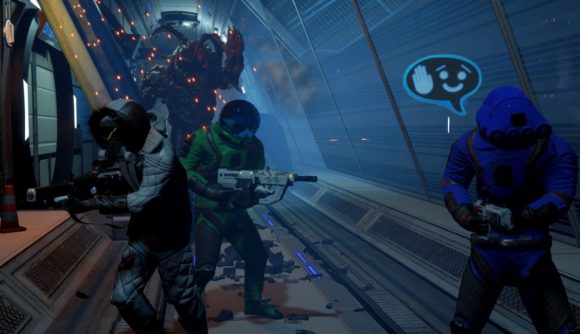 As the title implies, Unfortunate Spacemen is about astronauts that have fallen on some real bad luck. It’s an asymmetrical multiplayer about trying to survive against an onslaught of aliens, one of which is a shapeshifter, and not only has it escaped Early Access, it’s gone free-to-play.

This isn’t straight asymmetrical like Dead By Daylight, mind, this is a bit more intense. In the standard mode, 16 of you spawn into a game, and one of you is an alien who can pretend to look like a friendly teammate to sabotage efforts. The objective as a non-alien is to survive and escape from waves of insect-like Crumerian, so the shapeshifter in the ranks can cause a lot of trouble in any of the 15 maps.

It came out of Early Access a few days ago (cheers, PCGamer), and publisher New Blood and developer Geoff Keene have made it free in order to bring in new cadets. In addition to the above, you get a five-player story mode, and a 10-player survival mode involving wave after wave of Crumerian scum. A cosmetic marketplace lets you customise your space-suit while chipping in a few bucks, and the Deathproof edition gives you a selection of digital goodies for £15.49/€16.79/$19.99

New Blood had a fair showing during last weekend’s not-E3. Quake-style shooter Dusk getting mod support, and the creator of Dusk making a Thief-like survival horror were both highlights.

You can read our round-ups for the PC Gaming Show and the Future Games Show, for all the big reveals and tidbits that were discussed.