It’s easy to think of wargaming as a relic of PC gaming’s past. Since the genre’s heyday arrived in the 1990s, when games like Panzer General managed to find success with PC gaming’s mainstream, wargaming has been eclipsed by the vast popularity of action games and RPGs. At times, it also seemed to be trapped in the past, out of date in terms of both technical standards and design accessibility.

A funny thing has happened in the past few years, however. Wargaming has enjoyed a quiet renaissance at just about every level of the hobby. It might even be a healthier genre than it’s ever been before, encompassing a wide variety of design ideas and historical subjects. While wargaming might not command the same kind of attention it did in PC gaming’s infancy, it is once again a vital and exciting genre for PC gamers to explore. Here are some of the very best.

If you’re just getting curious about wargames, or if you’re looking for more recommendations to sate a growing appetite for combat, here are the best, easiest-to-acquire wargames on the PC right now.

We’ve broken them down into three categories: intro, intermediate, and advanced. That’s not a comment on merit or even sophistication. Rather, it’s more a measure of the complexity and, in some cases, the amount of BS, that you’re letting yourself in for. One of the very best games on this list, Unity of Command, is an “intro” wargame with incredible depth and replayability.

This list is not comprehensive but it is curated. A few older classics have been left off for the moment because they are either hard to get running or are painfully outmoded. Still, this list will grow and change with time. If we’re recommending something that looks like it belongs on a Commodore 64, it’s because it’s too fantastic and irreplaceable to ignore.

Finally, a number of these games have been discussed at length on my own Three Moves Ahead podcast, in case you want some additional critical perspective. 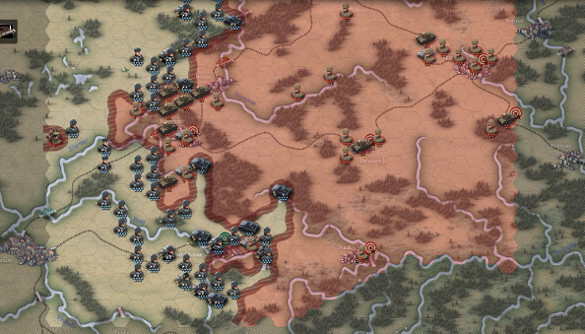 This might just be the best game on this entire list, and one of the defining games of this wargaming renaissance. Unity of Command is a turn-based operational wargame set on the Eastern Front of World War 2. With its expansion campaigns, it encompasses everything from Operation Barbarossa to the Soviet drive into Germany.

Unity of Command is devilishly hard thanks to excellent scenario design and its merciless focus on your ability to manage supplies across distance. Unity of Command is about reading the map and planning bold, decisive campaigns that will keep your army rolling despite perilously long supply lines and the constant threat of being cut-off. This is a great introduction to operational wargaming as well as a great game in its own right.

Buyer’s Guide: Available on Steam or direct from 2×2 Games. 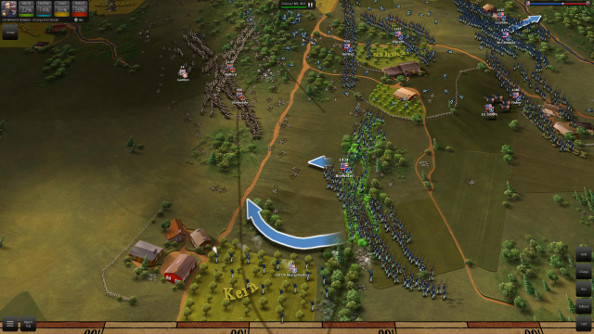 No surprises here. After a strong Early Access showing, this became an instant-classic upon release. It’s a real-time tactical wargame covering the entire Battle of Gettysburg, complete with a copious variety of what-if scenarios. Those make for an especially replayable and challenging campaign, as overwhelming success or failure in one scenario set up an ahistorical battle in the next.

But the best part about Ultimate General: Gettysburg is its ease of play. With lovely, easy-to-read grahics and a simple click-and-drag order interface, Ultimate General is a game that lets you dive right into the action with no hesitation. 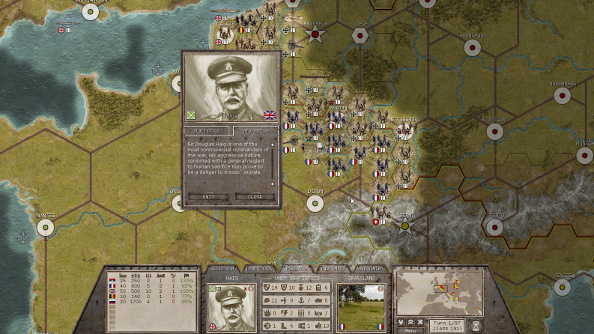 The First World War is a fascinating conflict and one that’s not been done justice in wargames, but Commander: The Great Wargoes a long wayto making up the deficit. Placing you in charge of either the Entente or the Central Powers, you must manage a strategic conflict that stretches from the North Atlantic to Iraq. It’s a simple game, but the scale of the challenge is enormous and brings to life the hard calculations that faced the warlords of 1914-1918.

As befits a strategic-level wargame, Commander: The Great War is about managing the finite manufacturing and manpower resources of entire nations and employing them effectively in a war whose scope seems only to grow. You have to anticipated your needs several turns in advance, making sure that a pipeline of fresh units will reach every place they are needed, when they are needed. Likewise, you also have to identify places where you can make real progress, places where you must accept a stalemate, and places where the situation is teetering on collapse. Few games make this level of command so challenging and so fascinating. 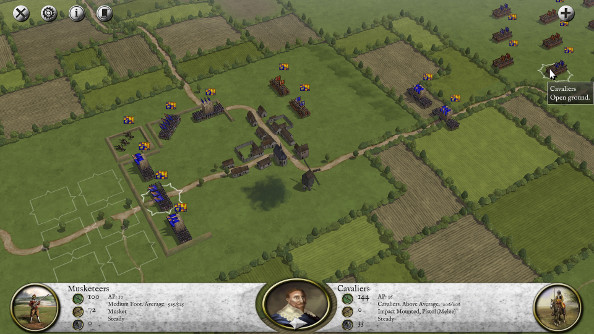 Pike and Shot is a really clever and unusual introduction to the classic wargame formula. It’s a hex-based, turn-based tactical wargame about the Thirty Years’ War and the English Civil War, where gunpowder weapons were present on the battlefield but did not yet dominate it the way they did in the 1700s and 1800s.

It’s a crude and experimental period in warfare, and Pike and Shot brings that to life as you push colossal infantry tercios (a heavy formation of mixed pikemen and musketeers that amount to a land-battleship) across the map at a glacial crawl, while more nimble squadrons of cavalry and light infantry wheel and skirmish around them. It’s easy to get a handle on the combat system, but it’s harder to learn how to manage these unwieldy armies. It’s great fun and a wonderful introduction to classic tactical wargaming. We were quite keen on it on the 3MA podcast. 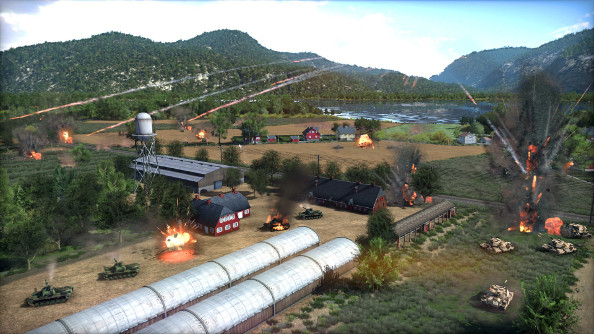 Purists might take issue with Wargame’s inclusion on this list, despite its name. It is, after all, as much a real-time strategy game as a wargame. But with its endearing obsession with military minutiae and brutal, uncompromising model of late 20th century conventional conflict, it lives up to the name on the box.

There’s nothing about AirLand Battle that isn’t terrific, except maybe the name. It’s got some excellent dynamic campaigns that make each battle meaningful and throw tons of interesting tactical curveballs at you as attrition takes its toll on your bread-and-butter units. It’s also got some of the best graphics of any RTS or wargame out there: when a cluster-bomb hits a tank-filled treeline, or when an infantry unit ambushes a tank column on a narrow road, Wargame vividly demonstrates the awesome precision and firepower of Cold War weaponry. Most importantly, Wargame also employs a brilliant model of fog of war that keeps you guessing about the quality of information you’re getting about “visible” terrain and units. Every battle is a game of cat-and-mouse with the most lethal military hardware ever devised, and it only gets better in mutliplayer. The 3MA gang raved about it, including the great Tom Chick.

Buyer’s Guide: Available on Steam. Start with AirLand Battle and not Red Dragon, which has weaker campaigns. However, Red Dragon is worth getting eventually, if only for the comprehensive list of military hardware. 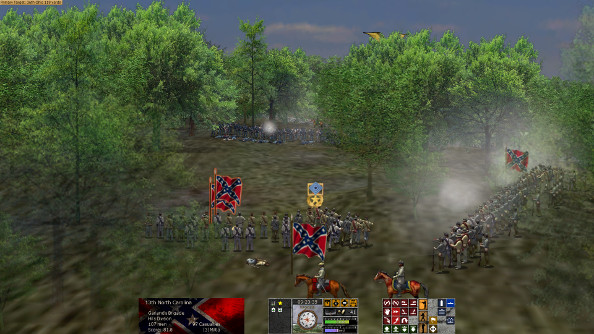 This is hands-down the best representation of 18th and 19th century field command ever made. This is not a wargame where you exert god-like control over the battlefield, but are instead one single commander on a battlefield full of them. The chaos and confusion of battle comes to life in this real-time wargame, as friendly forces guarding your left flank suddenly move off for no apparent reason, and your commanding general sends you a runner asking you to spare some forces to help the beleaguered division on your right.

This is less about warfare as an intellectual exercise in tactics and more about making snap decisions based on shaky information, gut-feelings, and orders that may or may not be out-of-date. There’s nothing else like this series, and it’s a must-have for anyone who wants to understand command in this period. It’s worth overcoming the blurry graphics and unit sprites.

Buyer’s Guide: Available from Matrix / Slitherine. The expansions are worth getting after you get tired of the base game and scenarios and want something else. 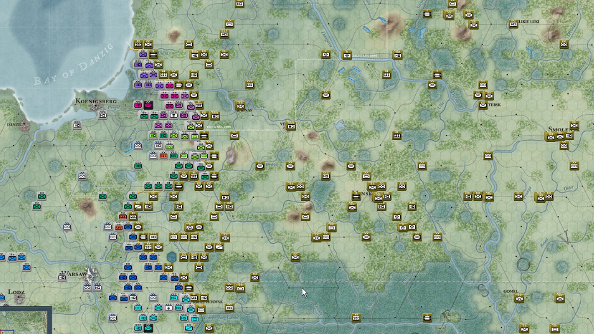 War in the East

Some games are complex for the sake of being complex. They appeal to “rivet-counters” — wargamers who want every historical detail represented in a game without regard to relevance. War in the East puts them to shame by putting incredible, overpowering scope and historical detail to use in one of the most challenging and epic wargames.

Underneath its old-fashioned counters and hexes, War in the East is one of the most evocative representations of World War II warfare ever made. Have you ever really considered the sheer size of World War II combat, or the immensity of the Soviet Union and Hitler’s gamble to conquer it? You can read all the books in the world about the war, but until you’ve sat there staring at a German Panzer army outside Kharkov, then zoomed out to see how what a small and paltry force it really is, and how Moscow and Kiev are practically a world apart, you don’t really understand.

Surprisingly enough, War in the East is not that hard to play. But learning to use the wealth of information and tools at your disposal requires actual study. If you just want to push tank and infantry divisions around a map you can do that, but playing the mind-boggling grand campaign with any degree of competence means logging some serious hours with the manual, and a lot of time poring over tables and supply charts. It is, however, well-worth the journey for any serious wargamer or student of history. 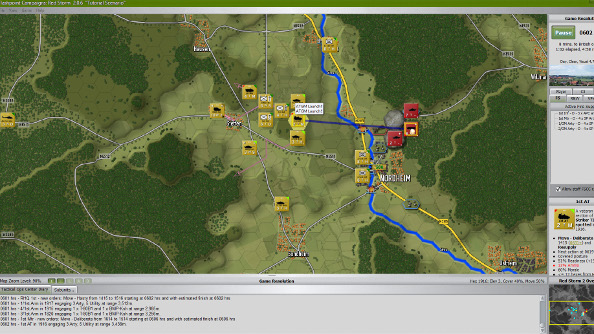 This is the scholarly, serious younger brother of the Wargame series. Taking the same subject — 1980s conflict between the Warsaw Pact and NATO — Flashpoint campaigns adopts a realistic and challenging model for a Cold War turned hot.

There aren’t really turns for Red Storm. Rather, events play out continuously, with pauses for each side to give orders and given intervals. But here’s the catch: those gaps between orders phases change depending on who you are playing and how chaotic things have become. NATO, with better command infrastructure, can give orders more often and react to events more dynamically. The Soviet side has a more sluggish and less responsive doctrine… but enjoys the advantage of overwhelming numbers and firepower. As the battle goes on, each side may find their ability to issue orders and control events impaired. It becomes a fascinating game of issuing the most realistic, practical orders based on ever-evolving circumstances, rather than executing ideal plans. It’s a different way of thinking about warfare and a brilliant addition to the wargaming canon. 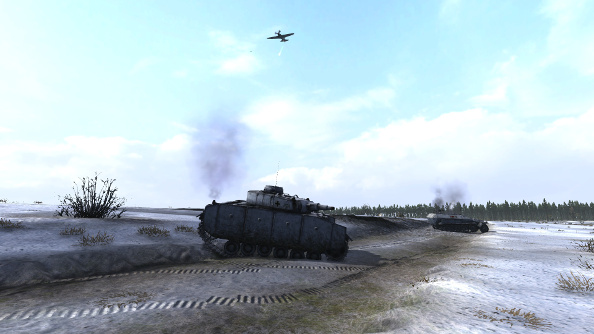 Underneath a Byzantine interface imported from 1993 is one of the best squad-level wargames since the Close Combat series. But that interface is a huge hurdle, and not one to be underestimated before diving into this game.

Once you’re immersed, however, Graviteam Tactics (formerly Achtung Panzer) is an amazingly vivid and unsparing simulation of tactical combat on the Eastern Front. Using a pausable continuous-time system, you fight sprawling, chaotic battles across the sparse and challenging terrain of the rural Ukraine. Unlike a lot of of other wargames, you get an amazing sense for space and distance in this game, and feel how the vastness of the Soviet plains swallows up entire companies and battalions as they grope toward each other across kilometers of deadly ground. With dynamic campaigns and loosely structured battles, Graviteam Tactics is difficult to come to grips with, but it’s well-worth the effort.

Buyer’s Guide: Available on Steam. There is a lot of “DLC” for the game, though really each DLC is more like a separate game, especially once the series gets into more recent conflicts.