Sitting somewhere between an Iron Maiden fever dream and Roger Dean’s early Psygnosis box art, Valfaris’s aesthetic is a heady concoction. That’s hardly surprising given that this unsettling, raucous 2D action-platformer is being cooked up by the same team which brought us 2016’s heavy-metal themed Slain: Back from Hell.

Valfaris doubles down on its metal influence, tossing together bio-horror, a far-future setting, brutal combat, and riffs. You play as Therion, a square-jawed, remarkably violent chap with a striking mane of flowing blue hair. Your former home – a sprawling paradisiacal space citadel – mysteriously vanished at some point in the recent past, but has since reappeared in orbit around a dying sun. It’s now beset by an “ever-growing darkness”, and it’s your job to hop back onboard and investigate. Should be fine.

Supporting your efforts are a giant blue energy sword and an expanding collection of ever-more-ridiculous guns that you liberate from glowing-green energy vats dotted around the levels. This colourful armoury includes such delights as the Wolflight pistol – which makes enemies explode in a cloud of ethereal wolf heads that seek out other targets – and a destroyer-class weapon called the Hellwraith that flings molten skulls at anything you point it towards. Using your sword will also build up a special attack bar which allows you to deploy spectacular, screen-filling assaults.

You’ll face all manner of horrors along the way, including a giant ‘Cydog’ that launches homing missiles from holes in its back, creepy plants with bulging eyes, and irritatingly coordinated spikey grubs who’s equidistant marching patterns make navigating certain sections a (sometimes fatal) headache. Some rooms will lock you in and throw waves of enemies at you just to make things tougher, too, but you should view this as a great opportunity to splat as many gibs about the place as you can. 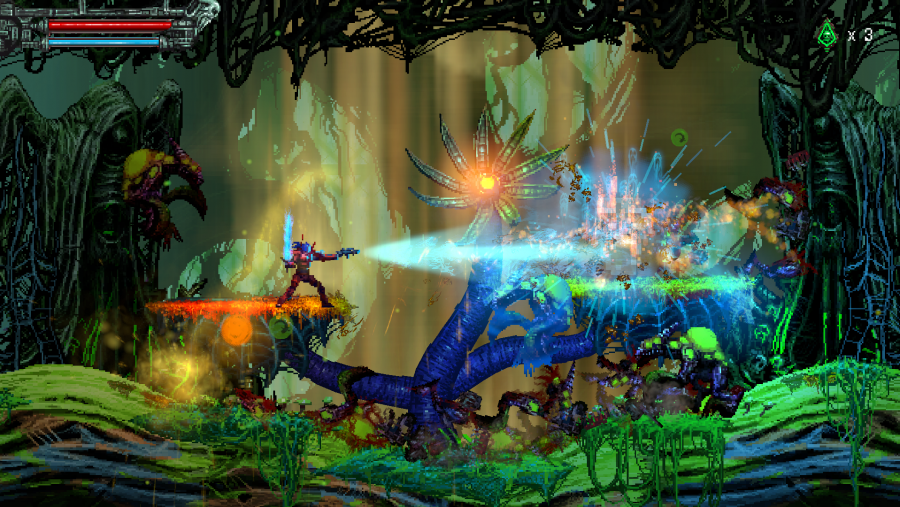 While the game offers up a fairly robust challenge, checkpoints are plentiful. You can save at these, of course, but you can also change weapon loadouts and apply upgrades. There’s a catch, however: you’ll need to spend a save crystal to activate them. These are dotted about the levels, many squirrelled away in hard-to-reach locations, and set up a risk/reward element to proceedings.

On first play, then, Valfaris reveals itself to be a joyously unapologetic dose of gory catharsis. Living long enough to experience the next ridiculously overblown, wet-neon weapon effect is motivation enough, too.

Valfaris will be released sometime next year, but there are plenty of other upcoming PC games to get stuck into before then.