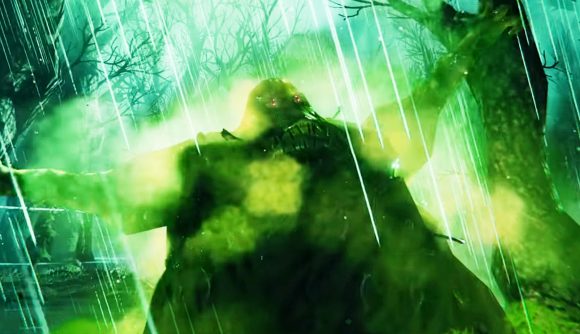 Some of Valheim‘s bosses are going to be much harder to beat from here on out. Iron Gate reveals in the Viking game’s latest set of patch notes that Bonemass, Moder, and Yagluth have been tweaked to make them more challenging as we were all “killing them too fast”. When I say we, I mean you. I’ve been living the pleasant life of restoring old, abandoned huts.

Bonemass lurks in the swamp biome and is the third boss you encounter in the survival game. His primary source of damage is thumping you on the noggin if you get too close, but he also unleashes a poison attack that fills the air around you. Moder can be found in the mountains and can freeze you or attack from the air as she flies. I, uh, am not looking forward to seeing what makes her “more challenging” – best bring your fire arrows. Yagluth is the fifth and final baddie of the bunch, and you can find him in the Plains. He can breathe fire and summon a meteor shower upon the area.

Iron Gate didn’t detail how it’s tweaking the difficulty. So the changes could be something as simple as an increase to their damage rather than an overhaul to the moveset of each boss.

Handily, Iron Gate has also managed to fix world corruption bugs that stem from people pressing Alt and F4 while logging out. Your lovely wee log cabins have just gotten a bit safer.

There are other quality of life updates, too. Iron Gate says that the most significant change is the updated socket backend that should improve connection issues. Vulkan support has also been enabled in Windows builds and can be switched on as a launch option in Steam properties for Valheim. This may fix some random GPU driver-related crashes that can occur

You can catch the full set of notes on Steam. If you need some help boss busting, our Valheim weapons and Valheim armor guides will get you kitted out. We also have a Valheim Bonemass guide to help you swat the swamp baddie.