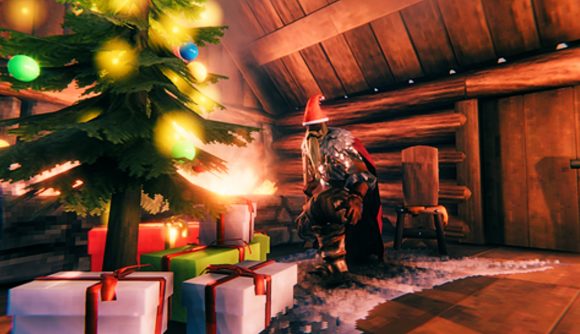 Surprise! Valheim has got a slew of Christmas goodies to mark the festive season. Developer Iron Gate has released a patch for the survival game, including quality-of-life updates alongside some bug fixes alongside the seasonal treats.

The next time you log in to Valheim, you should find some Christmas items at the trader. You’ve got a Christmas tree and gifts to decorate your base with and a Santa hat to wear while doing it. The yule tree has been available in the debug menu for a while, but it’s nice to officially see it come to the game. As was recently teased, you’re also getting an armour stand. It’s not quite festive, but players have been asking for it so under the chrimbo tree it goes.

Iron Gate has also taught Valheim’s animals to chill out a bit. Tamed animals are no longer afraid of fire, while tamed wolves will no longer howl at all. I love my loud and shouty lads, so I’m not sure how I feel about the latter change, though I imagine my server pals will be thrilled.

While we don’t quite know when Valheim’s Mistlands update will be showing up, we’ve got plenty to keep us busy. The Viking game recently got a new baddie that you can dispatch for some wood-like new armour – it truly is the season of giving.