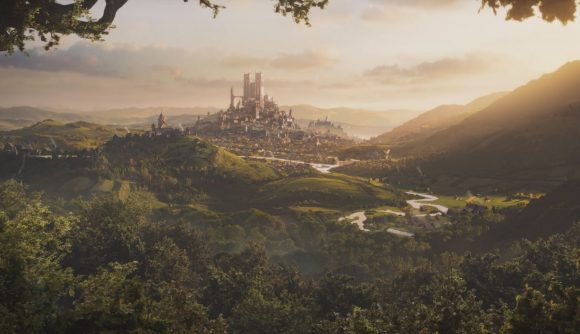 If you’re an Xbox fan as well as a PC gamer, chances are you’ll have dipped your toes into Fable 2 at some point, the second big adventure in Lionhead’s beloved RPG games series. One of its key locations – for reasons I won’t go into if you’re yet to sample Fable 2’s delights – is Castle Fairfax, a stately, looming stronghold overlooking Bowerstone. It’s quite a sight – and now it’s come to Valheim, too.

User _-Gh05t- has been posting some images of their work-in-progress Castle Fairfax build on the Viking game’s subreddit, which you can check out via the embeds below. While the castle’s not in its final form just yet, the images do give a good idea of its scale and style – and, given it’s been built using a totally different, fantasy Viking-era game’s tools and hewn in a more rustic style, it captures the original’s look and feel really authentically.

We can see its striking south-facing tower looming high above the snow and mist below, with the equally recognisable ornate bridge linking it to the main castle visible, too.

The shape of the build’s blueprint, its grey rock and wood structure, the turrets and other features peppered around it – all of it so far adds to up an unmistakable sense of the real deal. Here’s the build’s progress so far:

As you can see, the castle’s got a little way to go before it’s complete, but it’s a magnificent start, and it’ll worth keeping an eye out to see how it comes along if you’re a Fable 2 fan keen to see the finished thing. The big question is whether it’ll later come with the Demon Door and slightly grumpy butler. Here’s hoping, anyway.

_-Gh05t- reached out to us to let us know they’re planning to showcase the build on their YouTube channel once it’s complete, which should take at least two weeks (what you can see above is three evenings’ worth of work). If you’re keen to do a spot of building in the survival game in the meantime, be sure to take a peep at our Valheim building guide for some tips.