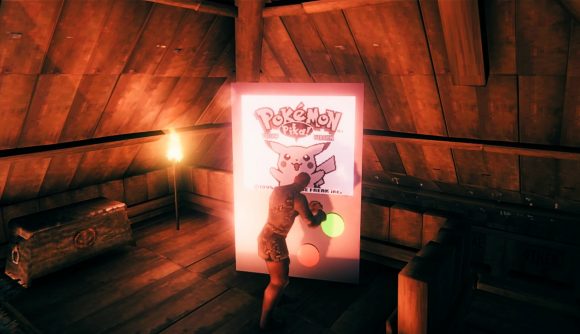 Valheim has a lot going for it. Living off supplies from day to day as you scour foreign lands for material to forge weapons and armour from feels tense and exhilarating. A mere voyage across the ocean to face another boss can prove soothing or stressful, depending on how the wind is blowing. Valheim also exceeds in its quieter moments as you slowly piece together cool bases and structures, only breaking to venture out for more supplies. While there’s heaps of stuff you can do in Valheim, though, playing Pokémon isn’t one of them.

That’s not a limitation for everyone anymore as someone has managed to bring the hobby of GameBoy emulation to the Viking survival game with a new mod. Mixone’s Valheim GameBoy mod plonks the old handheld gaming device straight into your game and makes it a buildable element. It might be, uh, a bit bigger than you remember.

You can find the mod for yourself, we’re sure, but, if you’re thinking of using it for more than decorative purposes, it’s worth keeping in mind that Mixone isn’t supplying any ROM files as it wouldn’t be legal.

You can see it in action down below:

If you’re looking for Valheim building advice, you know where to click.