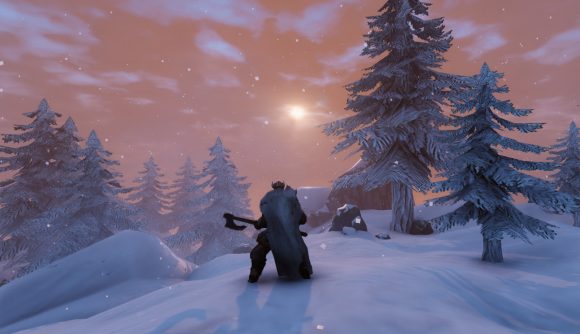 My favourite thing about Steam is loading up the most-played game charts and seeing what new hit-of-the-moment is bubbling up in popularity. Right now, that’s Valheim, a Norse mythology-themed take on survival games. It’s already hitting some impressive player numbers in Early Access, and the devs are already breaking down what to expect from the game throughout the year.

There are four major updates planned for 2021. The first is called Hearth and Home, the second is Cult of the Wolf, the third is Ships and the Sea (an expansion of existing ship mechanics), and the fourth is a new biome called Mistlands. The devs say Early Access is set to last for about a year, so this should be a pretty solid idea of what the game’s going to look like leading up to release.

The devs also have a list of additional updates labelled under ‘if Odin wills it’, so there are a number of features that may or may not make it in this year. Those include general things like multiplayer interactions and combat improvements, as well as more specific, esoteric features like ‘moon phases’ and ‘Munin’, the legendary raven which serves Odin.

What’s Munin do? I don’t know! But I certainly want to find out…

Like our Norse lord once said “We’ve Odin just begun”. Take a look at all we’ve got planned for 2021 as we sail through Early Access and continue building the world of Valheim together. #valheim #vikings #indiegame #survival pic.twitter.com/zKwV09Xqew

Valheim has reached a peak of 15,486 players just one day after launch, as SteamDB shows, and that number is continuing to grow.