Looking for the best Valheim seeds? Valheim’s brutal wilderness is a procedurally generated world. When you start a new game, you can either have the game generate a random string of text from which to generate the environment you play in, or manually enter a code to generate a specific seed.

Every Valheim map that is generated has the same basic ingredients – spawning altars for each of the Valheim bosses, and the same assortment of treacherous biomes – but where those features end up, and what the lay of the land looks like, depends on the seed you put in when you start a new world.

Thanks to the viking game’s runaway success, millions of Norse warriors are constantly creating new worlds, and many of them have shared the best Valheim seeds they’ve stumbled upon. These seeds are useful for more than just starting your first Valheim world; you can load into different worlds – including those hosted on Valheim dedicated servers – with the same character. Conveniently, you’ll also carry over your skill progression and your entire inventory.

So instead of traipsing across mountains and sailing the seven seas to find and retrieve Valheim iron and Valheim bronze, you can simply load into a more convenient Valheim seed, fill your boots with bountiful resources, and then log back in to your original Valheim save file where you’re safe at home, ready to smelt it all into the best Valheim weapons and Valheim armour.

If you want to check out any of these Valheim world generation seeds for yourself, the Valheim World Generator is a fanmade tool that shows all the secrets of any seed you input. We’ve used it to generate some of our seed previews below.

So, whether you’re looking for Valheim mining seeds, convenient Valheim trader seeds, or simply a good seed for adventuring, here are a few of the best Valheim seeds, tested for version 0.202.14. They’re case sensitive, so copy carefully.

The best Valheim seeds are: 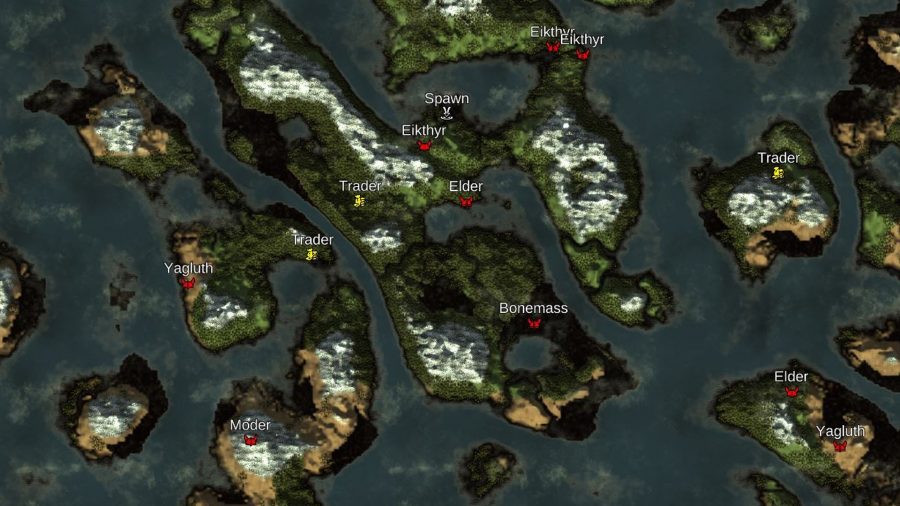 Found by Reddit user u/InfernoFPS, this ‘potential speedrunner seed’ has the first three Valheim bosses, plus the trader, very close to spawn. All the biomes can be found on the starter continent, and the fourth and fifth bosses are just over a narrow channel. 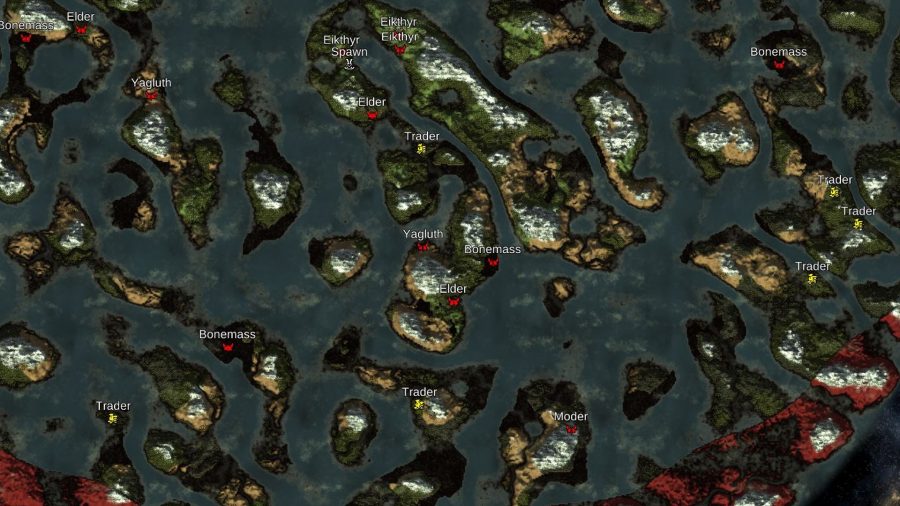 This seed, found by u/IamJustJunior, generates four out of five bosses on a huge, U-shaped starter island. There are plenty of mountains, swamps, and plains within reach. The first boss is a stone’s throw away from spawn, and all of them are on the starter island – except for Moder, who is on an island to the south. 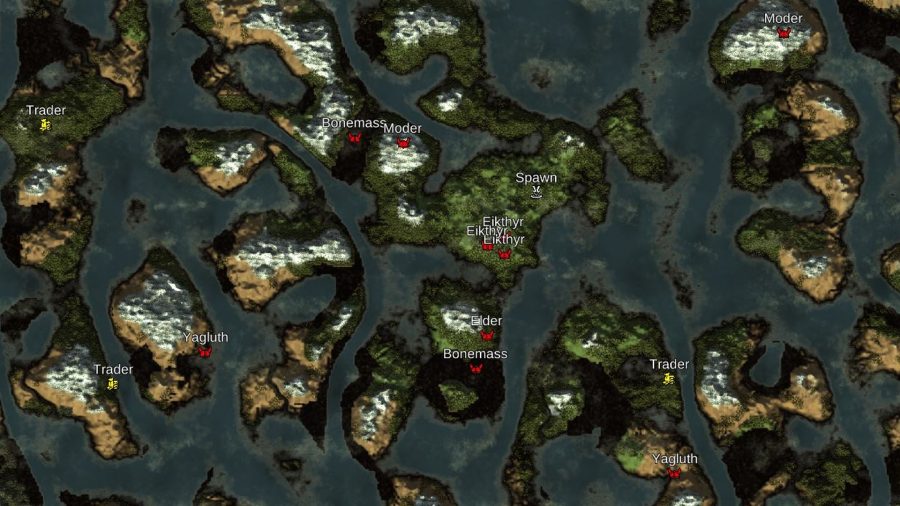 This seed generates most bosses very near to spawn, and the Trader and Yagluth are just over a small channel on an island to the southeast. 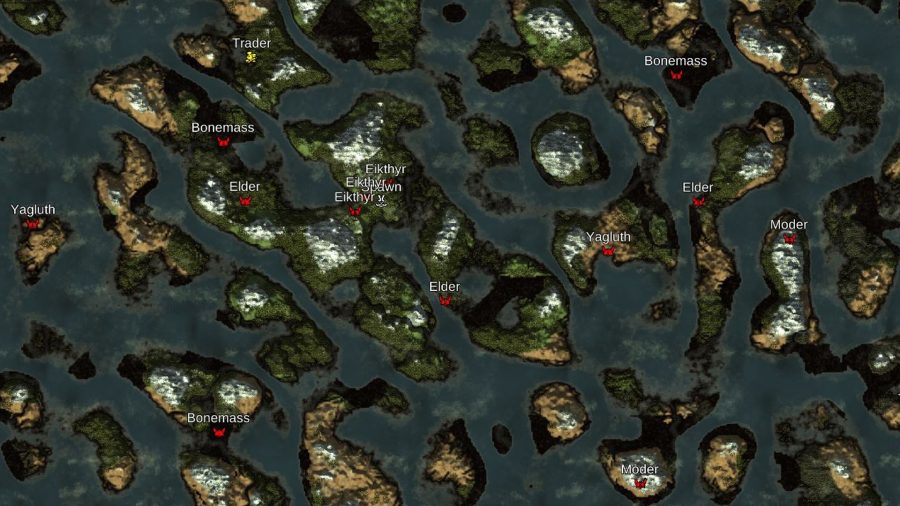 Found by u/Previlein, this seed is convenient for adventures as well as mining; near Bonemass, there’s a black forest biome stuffed with copper right next to a swamp full of crypts for mining iron, allowing you to set up a nearby camp that covers both crucial resources. Moder is a little further away than they were in previous game versions, but hopping on a boat with your fellow warriors is all part of the viking experience. 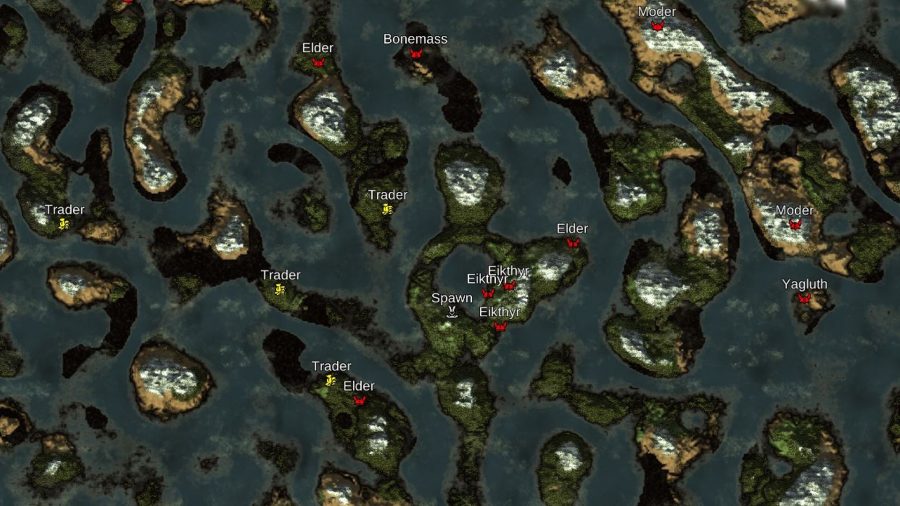 Discovered by u/remmiz, this seed spawns you on the shore of a giant lake surrounded by meadows, with helpful channels into the ocean. This would be a scenic spot to get out your Valheim building tools and create a picturesque stronghold. The trader is pretty close, but the bosses are a little further afield, so it’s perfect if you’re looking for more of an adventure.

Looking for a different kind of Valheim seed? If you’re a budding farmer seeking info on the type of seed you plant in the ground, and have somehow read this whole article without realising you’re in the wrong place, here’s the lowdown: you can plant carrot, turnip, and tree seeds using the Cultivator; once you harvest a carrot or turnip, you can replant it to acquire more seeds. Ancient seeds can’t be planted; they’re used to summon The Elder in the Black Forest.

Got it? Good. Those are the best Valheim seeds we’ve come across so far. The Hearth and Home update is finally here, introducing new mechanics like the thunder stone and craftable crystal items. If you want to fly around in God mode and survey the land for yourself once you’re in, you’ll need Valheim console commands and cheats.