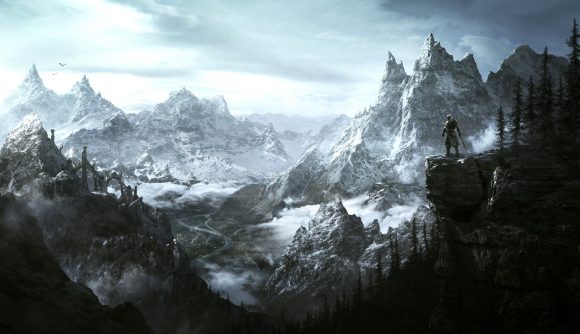 If you’re a Skyrim fan, you’ll remember High Hrothgar well. Nestled at the top of Tamriel’s highest mountain, Throat of the World, it’s a stony, weatherworn monastery full of Greybeards who love to shout and set Dragonborn on their big adventures. The RPG game’s location is pretty iconic among fans, and now it’s made the leap to another Viking-esque adventure: Valheim.

Valheim fan McBadWord has posted a clip of their in-game creation on the Viking game’s subreddit, which you can check out below. The clip opens at High Hrothgar’s foot (with a few of those ‘7,000 steps’ even visible in the mountain path), showing the building set on top of a suitably snowy mountain. Panning across its façade, the video shows the Valheim version has captured the Skyrim location’s unmistakable look faithfully.

We can see the central tower flanked by the two sets of stairs, its rugged grey stone walls set into the rocky mountain top, and even a little courtyard out back with a roaring fire and portal-flanked gate (reminiscent of the one in which the Greybeards teach you the Wuld Nah Kest – or Whirlwind Sprint – dragon shout in the real thing). It looks like players will have to fill the role of the mysterious Greybeards themselves, but there’s a lovely hearth inside for them to warm themselves by when they do.

The Valheim High Hrothgar is enormously impressive, not least because the game’s only been out in Steam Early Access for three weeks, and the level of craftsmanship needed to recreate the large, looming temple must be pretty high. Take a look below:

High Hrothgar in Valheim from r/valheim

The modder has provided a link to their creation’s world save in the Reddit post’s comments, which they say you can find at “2874, 163, 2302” in the game – “for explorers, this means east by northeast,” they explain. “Maybe a day or two’s travel. Quite the journey, but treasure awaits!” Indeed it does.

We can’t tell you how to build Skyrim’s High Hrothgar in Iron Gate’s new survival game, but we do have a Valheim building guide as well as Valheim server and Valheim workbench upgrade guides if you’re keen for some tips on how to get started in the game.