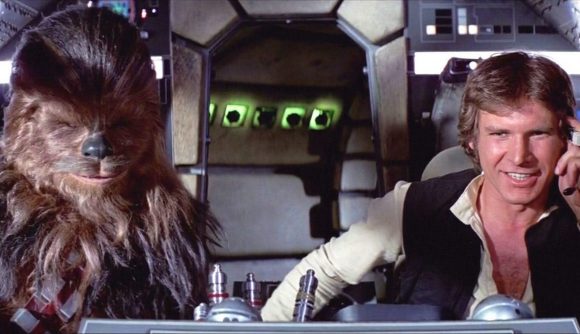 It may only be out three weeks, but players are already doing some impressive things with Valheim’s building mechanics. One Star Wars fan has managed to construct the Millennium Falcon, and though it can’t fly, it’s still pretty spectacular.

The spacecraft comes from Colonel-James-Parker on Reddit, who posted a video of his Millennium Longboat, a huge in-game replica of Han Solo and Chewbacca’s iconic ship, made from wood and some serious dedication. The clip starts outside, admiring Parker’s work on pure aesthetic, and at first, it seems like it’s just something to ogle, which would absolutely already make this a cool thing to behold.

But then, when we reach ground level, as Parker shows the scale of what he’s made, using some carefully placed green torches for the Falcon’s hind thrusters, that’s when it becomes awe-inspiring. You can actually get into the Millennium Longboat through the on-ramp, just like the movies, and inside is Parker’s full, spacious living quarters, giving him plenty of space to practice his lightsaber skills, and the bridge, where Han and Chewie so often stared down disaster. It’s really just a big window, table, and two seats, but it’s instantly recognisable, and enough to warm the heart of any fan of a long, long time ago, in a galaxy far, far away.

“Chewie, we’re home.” / I present you the Millennium Longboat. (test build) from r/valheim

Valheim has become a sales juggernaut, shifting three million copies so far, breaking its own concurrent players record over and over. We can’t quite help you make an x-wing, but we do have a beginner’s guide to Valheim, and guides on gathering everything you can craft, and how to set up a Valheim server, to help you on your way.