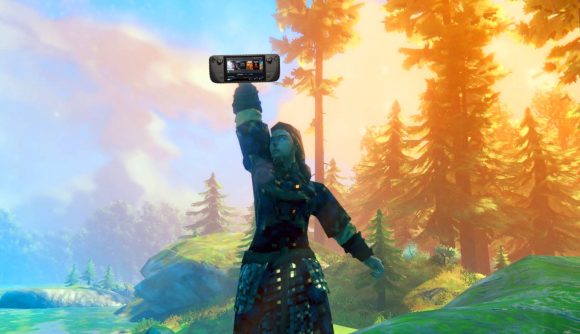 Valheim launched on Steam a year ago yesterday, and Iron Gate has outlined its Steam Deck ambitions as a birthday present. In a celebratory post, the Nordic survival game’s developers revealed that they’re currently working towards handheld optimisation, which could help it earn it Verified status.

In its “One Year of Valheim” event post, Iron Gate says “Steam Deck is also planned to launch in February! We would of course like to have Valheim running smoothly on it from the start, so that’s something we’re working on at the moment.”

Currently, Valheim comes with partial PC controller support, and it’s not yet included on the Steam Deck’s Verified list. However, the game is listed as “playable” on SteamDB, so getting Iron Gate’s Nordic limbo running on the portable shouldn’t be an issue. In fact, players should be able to boost fps and play with higher settings enabled, thanks to SteamOS’ included AMD FSR upscaling.

Iron Gate already has a busy second year ahead, working on new Valheim Mountain and Mistlands biomes. Hopefully, we’ll be able to bring the smash-hit Viking romp with us in our backpacks come February 25, as sending Greydawfs to Niflheim on-the-go sounds too good to pass up.