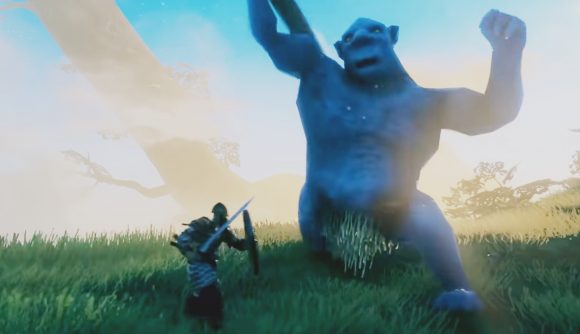 Valheim, Iron Gate’s new Viking survival game, has been making one Hel of a splash since it hit Steam Early Access in the first week of February. The indie hit has taken the PC gaming world by storm, racking up peak player counts of nearly 400k and has topped the Steam weekly bestsellers list two weeks in a row. Now, its devs have announced the new PC game’s already shifted a staggering three million copies.

“This February has been truly wild!” Iron Gate announces on Steam. “Less than three weeks into Early Access, we’ve already hit another milestone. Valheim has now been purchased by over three million brave Vikings looking to survive the tenth world of the Yggdrasil – or die trying – probably crushed by a falling tree.”

To illustrate this enormous figure, the devs explain that this is roughly equivalent to “74,319 longhouses stuffed with Vikings singing songs and celebrating victory with some great tasting mead, so.. SKÅL!” And, it is indeed an enormous figure. At the beginning of this week, Valheim had hit the two million sales mark, which means the indie game’s gained a whole million more in under a week. Phwoar.

The devs highlight some other records Valheim’s been smashing to bits since its arrival on Valve’s platform, too. For example, they announce that the game’s gained more than 60,000 ‘Overwhelmingly Positive’ reviews on Steam, and that this puts it in the top 250 best-reviewed games on the platform, too (it’s currently “78th and climbing!” as of the devs’ post).

Head to Valheim’s Steam Charts page and you can sense this isn’t slowing down any time soon, either. According to the site’s figures, the title has hit a peak of 389,386 concurrent players in the past 24 hours, and – as of writing – it’s comfortably in the top four most-played games on Steam by current player count.

If you’re already a Valheim fan, or thinking of getting into it, boy do we have you covered. Our guides team has prepped a Valheim weapons guide, Valheim progression guide, Valheim building guide, and plenty more besides – which you can find via our Valheim page – to help you get the most out of the Viking game.