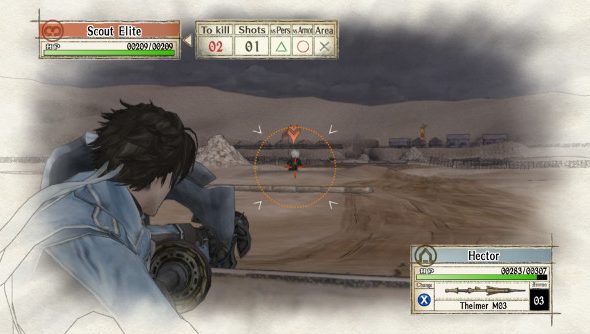 Better late — very late — than never. I was thrilled to hear that PC gamers would finally be getting a chance to enjoy Valkyria Chronicles, which was a much-needed breath of fresh air for the squad-based tactical wargame at a time when the genre seemed all but abandoned.

Now, we only have ten days to wait until this gorgeous combination of JRPG, third-person shooter, and turn-based wargame finally comes to the PC.

Valkyria Chronicles is already available for preorder on Steam for a sale price of $18, and the store page lists it as a November 11 release.

In many ways, it’s a shame Valkyria Chronicles never made it onto PC when it was first released six years ago. It never seemed to find a happy home with PlayStation, with only the first game making it to PS3 and the rest being reserved for the ill-starred PlayStation Portable. The third game of the trilogy was never released at all in the west, because the second game performed so poorly.

That’s at least in part due to the fact that Valkyria Chronicles’ natural audience was always on PC. Consoles have never had a great strategy and wargaming tradition, and while Nintendo handhelds have fared better in that regard, the PC is really the home of strategy and wargaming in Europe and America. Can you imagine how well this game would have been received on PC back in 2008 or 2009, before anyone knew that XCOM would be resurrected as a tactical game?

There’s no denying that Valkyria Chronicles traffics in a lot of anime stereotypes that may grate on some readers, and it was cursed with some of the worst Japanese language voice acting I’ve ever heard. For a game that was often quite somber, there was a lot of what anime and manga scholars would call “kawaii bullshit”.

But that doesn’t detract from the superb art and animation, and some really excellent mission design. Jules cited an amazing mission in his write-up a couple years back, where your squad has to kite a super-tank while skirmishing with its escorts and guards. The mission in the picture above is an amazing cat-and-mouse in no-man’s land between two trench lines during a blinding dust storm. And because of the way you control each soldier from a third-person shooter perspective, you always feel like you’re in the action, almost as blind and uncertain as the soldiers you command.

It’s also got some of the most involved squad management of any game since Jagged Alliance 2, where each character has special quirks, abilities, and synergies with other characters on your team. And for everyone but the main characters, permadeath is on.

So my advice is you book some time with Valkyria Chronicles when it comes out on the 11th, turn on the English vocals, and go enjoy an anime-WW2 where plucky teenangers save the day while the stodgy Grown Ups screw them over at every opportunity.

Escapist fantasy or daring commentary on Allied command during the world wars? You decide.