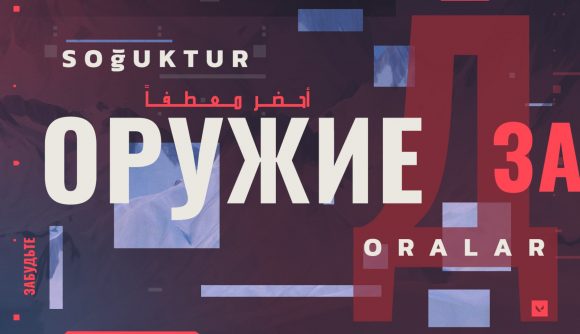 Valorant Act 3 is coming soon, and Riot seems to be teasing some new content for the rollout. A new teaser appears to be hinting at a snow-themed map for the new act – though curiously, the devs have previously said that new maps will only land with new episode launches. Regardless, there’s something frosty afoot in Riot’s take on FPS games.

The official Valorant Twitter posted an image today with an invitation to “decode this”. It features a number of words in Arabic, Russian, and Turkish, as well as the code ‘3A’, which suggests Act 3. The message translates to English (via PlayerIGN) as “It is cold over there, bring a coat and forget the weapon.” There are shots of a snowy mountain in the background.

This would seem to hint at a snow map launching soon, but Riot says new maps are going to be timed to new episode releases – we won’t get a new episode until Act 3 concludes in another couple of months. Acts are meant to include new agents, so we might be getting somebody hailing from colder climates here.

Either way, a cold wind is certainly blowing for Valorant’s next big update.

Check out our guides to Valorant characters or Valorant guns if you’re looking for some help.