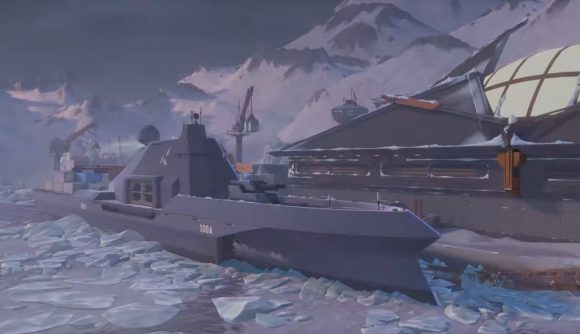 Valorant is getting a new map called Icebox with the launch of Act 3. Riot seemed to be teasing just that sort of addition last week, but the studio previously said they would only launch new maps with new episodes, the next of which is still months away. And yeah, that was the plan, but Riot says the community’s demand for a new map caused this release to get pushed forward.

Icebox is an industrial map set in a frozen shipping yard. A large outdoor area is piled high with shipping crates, and there are more constrained indoor office areas, as well. There also appears to be at least one zipline in the map, so it looks like Icebox will bring us a new gameplay gimmick, as well.

“This map was originally going to come out in Episode 2 as planned,” Riot’s Altombre says on Reddit, “but many of us on the project felt it was worth buckling down hard and getting it finished to release it early.”

This could change the plan for a new map in Episode 2, though the team is still working out what the new production schedule will look like, Altombre says. “In general though, we’re working to get you all maps sooner rather than later, and we want to avoid that ’empty episode’ scenario as much as we can.”

For now, you can check out the trailer above. Check out our Valorant tier list if you’re looking for some more theorycrafting.