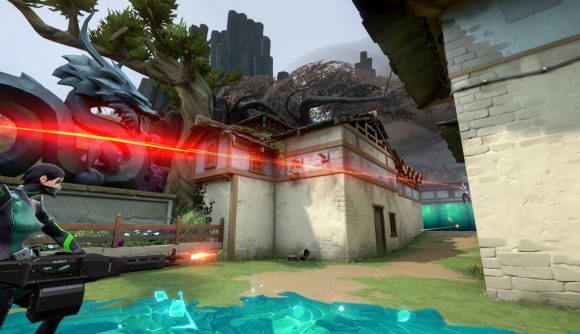 Streamers, esports pros, and other influencers are, as we speak, playing Riot’s upcoming competitive shooter Valorant in an online test weekend. Whitelisted accounts have been granted early access to the shooter this weekend, which is replacing a on-site influencer events that were cancelled due to the coronavirus outbreak.

As our sister site The Loadout noted, the influencer event kicked off May 27, and esports consultant and journalist Rod ‘Slasher’ Brelau has been providing a running stream of commentary and insider comments since it began. Breslau says the general impressions so far have been positive, adding the caveat that everyone has only had a couple hours with the game as of yet.

“This is of course after only two hours of beta test playtime and it’s way too early to really see how Valorant will play, but all of the players I’ve spoken to are longtime veteran FPS players that come from a wide variety of games including Counter-Strike, Overwatch, Rainbow Six Siege, Apex Legends, and Fortnite,” Breslau tweeted Friday afternoon.

Valorant is League of Legend developer Riot Games’ take on the competitive team-based shooter. While it can often look and feel a lot like Counter-Strike: Global Offensive, its roster of heroes – each with their own unique loadout and set of abilities – gives it the personalised flair of Rainbow Six Siege or Overwatch.

It’s not clear yet when the general public will be able to play Valorant, but the fact that Riot is running an influencer event seems to indicate that the Valorant beta will be starting sooner rather than later. Once the weekend is over, expect to start hearing a lot more about the game.