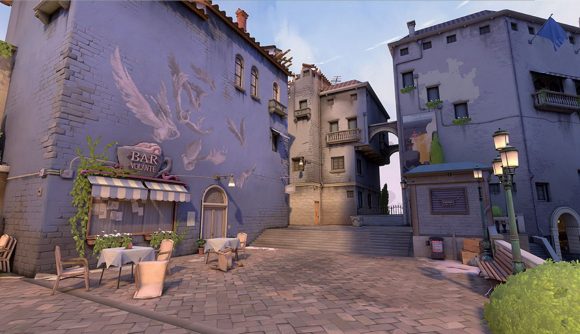 Can you believe Valorant’s launch was only last month? The multiplayer FPS game’s beta kicked off in April this year and, after several rounds of tweaks and tinkerings, it was released into the wild in early June. The game might look a little different now to how it did a couple of months ago, but now we’ve got an idea of what the game looked like much earlier into its development – around four years earlier, in fact.

Riot Games has posted a new blog on ‘The Birth of Ascent’ that includes a screenshot showing the Valorant map and the game’s HUD as they were approximately four years ago. “Ascent was one of the very first maps that we put together on Valorant and was the place where we developed and refined much of the core gameplay that you experience today,” Riot says in the post.

Sharing some details on how the map, and the game’s “core gameplay” mechanics, came to be, the studio explains that Ascent stayed in “Greybox” – the phase of development in which the dev team “build a rough model of the environment in our engine, set up all the core gameplay elements, roughly prototype new elements (like those mechanical doors), and then play it extensively” – for approaching three years.

Watch any clip of Valorant gameplay now and you’ll be able to spot the difference in the multiplayer game’s HUD easily – the earlier version shows a much less finessed minimap, top centre, and bottom centre bars. Take a look at the early image below:

Old picture of Ascent from 4 years ago was just released. #VALORANt | @PlayVALORANT pic.twitter.com/YV586jYWHN

As for which agent you can see, Riot doesn’t say in the post. It’s a little hard to pick out – the image seems to show an early version of Brimstone ahead, tearing around a bend away from the player character. However, on Reddit, programmer and anti-cheat lead for Valorant Paul ‘Riot Arkem’ Chamberlain says: “Nope!” when asked if the image shows an early Brimstone. Hmm. He also adds: “A lot of nostalgia in that image for me!”

If you’re thinking of diving into Riot’s team shooter as it is now, be sure to take a look at our guide to the best Valorant weapons and our Valorant tier list to get the most out of the game.