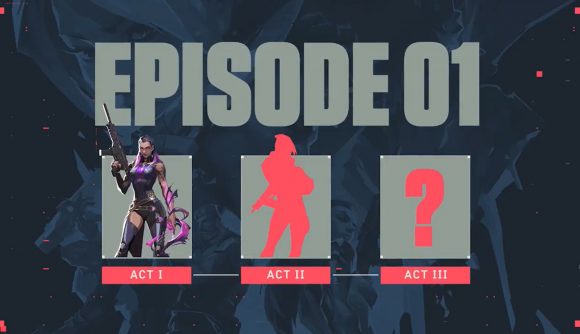 Now that Valorant is out, we ask the question we must ask of all multiplayer games: what’s next? A new dev diary from Riot is here as an answer, with a breakdown of how the game’s episode and act structure and how new content will roll out. The short, topline version is that the devs plan to launch a new Valorant agent every two months, for a total of six new characters every year.

Valorant content will rollout in episodes, which last about six months each. Each episode will be divided into three acts of two months each. A new agent will launch alongside each act. Battle passes will similarly be tied to acts, and skins will come “every week or two” for the duration. Some additional content will come during the acts, but those biannual new episode releases will be where we see things like new maps or major new gameplay features.

A new game mode is “likely” to happen before the beginning of Episode 2. Riot has accelerated plans for additional modes as a result of early player feedback, but the devs still aren’t sure whether modes will generally come alongside acts or episodes – and, generally, the studio warns that all these plans are targets that could shift depending on feedback or scheduling issues.

There’s also a tiny, tiny tease of Valorant’s twelfth agent – a silhouette alongside the Act 2 schedule at the 1:42 in the video below from executive producer Anna Donlon.

Executive Producer @RiotSuperCakes checking in from home on the launch of VALORANT and our future plans. Watch to learn more about what’s up next for VALORANT. pic.twitter.com/xPZ13gOQMS

These releases will also provide more story details, and there will be “significantly more to come” on that front around Episode 2.