What are the confirmed weapons coming to Valorant? We’ve been treated to some new gameplay alongside the reveal of Riot’s new FPS, Valorant. The free-to-play title will eventually be available in beta – here’s when you can expect to play the Valorant beta – with a full Valorant release date later in the year. Already compared to titles such as Overwatch and CSGO, Valorant seems to borrow a lot from the latter’s buying system and economy.

From a gameplay preview, we were able to get an idea of how Valorant’s buying system will work. For those familiar with CSGO, you’ll immediately recognise the economy used in Valorant, as Valorant features a buy menu that players are able to use once at the start of each round in a match. The money you earn each round can be carried over to the next round, meaning you can stack up your earnings to buy better weapons.

It’s not just weapons that are part of the economy, Valorant’s character abilities can also be purchased through the same system, instead of becoming available over time, you’ll only be able to buy abilities from money earned between rounds – essentially, you’ll have to be good at the game to progress. Here’s how the buying system and rewards work, including the Valorant weapons we’ve seen so far. 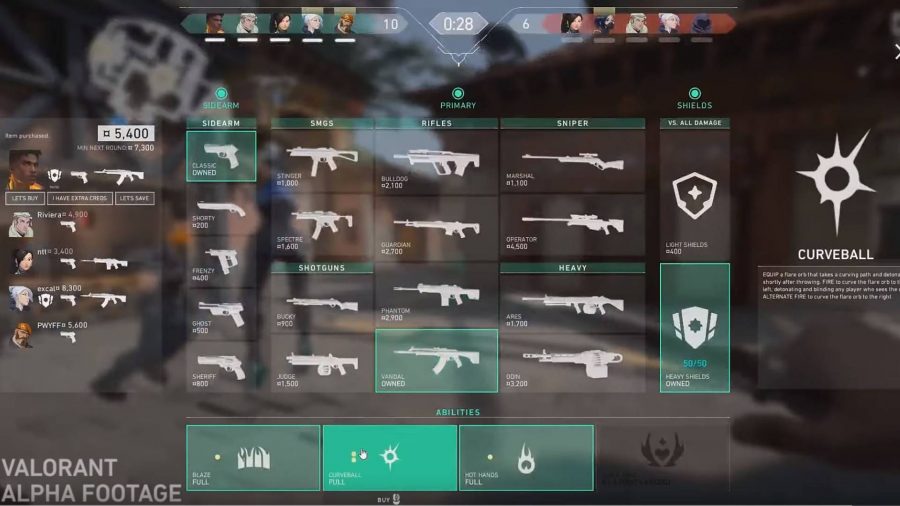 So far, we’ve seen 17 Valorant weapons from gameplay footage all within the norm of weapons you’d expect from a multiplayer FPS, including assault rifles, shotguns, pistols, snipers, and SMGs.