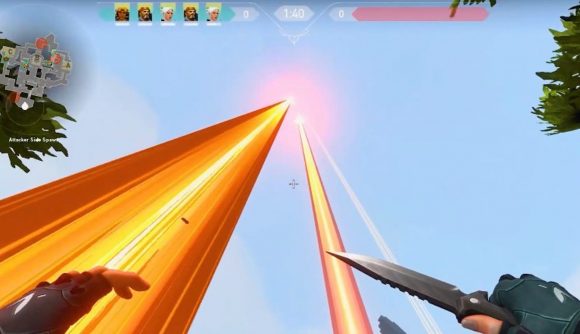 Some very creative Valorant players have created a custom game that’s essentially whack-a-mole, but with massive lasers. Dubbed ‘Laser Chaser’, it turns the FPS game into an intense 3v2 struggle as one team tries to outrun an unending downpour of lasers caused by the other.

Shown in a Reddit video from CurrentOfficial, the way it works is that two Brimstones are given unlimited use of their orbital strike ultimate, raining energy beams down from the sky, and three other Valorant characters have to survive. Rounds last for five minutes, which might not sound like too long, until you’re surrounded on all sides by orange beams that can hit you through solid concrete.

Everyone’s on the same team, so it’s about fun rather than competition. In the clip, viewable below, everyone’s generally either laughing, or trying not to panic, making jabs at each other about how poorly they’re doing in the otherwise simple challenge. It’s a carnival amusement built into the multiplayer game, complete with nigh-unbeatable odds, but a sense of accomplishment in taking part nonetheless.

A new Valorant battle pass launched at the start of this month, bringing a deathmatch mode, new skins for Valorant weapons, and new Valorant spray patterns. Killjoy joined the roster recently, too, adding a new agent to the Valorant tier list.

You can see laser chase in motion below – warning for foul language:

If you’d like to get chased by lasers, but haven’t tried Riot’s shooter yet, we have everything you need to know about Valorant, and the Valorant systems requirements, to get you up to speed.