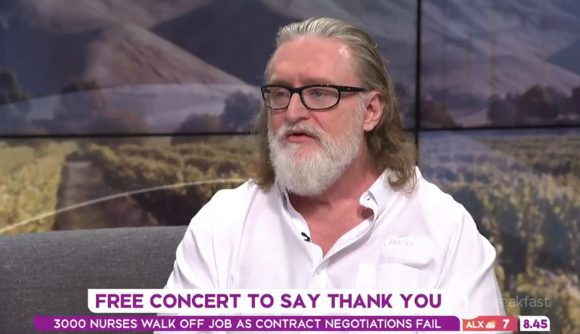 It turns out the president of Valve, Gabe Newell, has been stuck in New Zealand for months following the outbreak of COVID-19 around the world earlier this year. However, it seems he’s enjoyed his time there and found a way to thank the country for having him since March. As part of “a group of friends from around the world who found themselves based in Auckland” during the pandemic, Newell’s helping to stage a free concert to thank NZ.

Newell has appeared on TVNZ1’s Breakfast show alongside two friends, racecar driver Alex Riberas and his partner Teagan Klein, to talk about his experience of being based in the country in recent months, and the free concert, which is titled ‘We Love Aotearoa’.

It kicks off in Auckland on August 15, and is a “thank you to the people of New Zealand for being so kind and welcoming, and also an acknowledgment of the hard work that the team of five million have gone through to get us to where we are now”. You can find details on the event and lineup here.

Newell was originally in New Zealand for a short trip following the launch of Half Life: Alyx when the pandemic broke out globally, and then, as Klein explains, they “had 48 hours to decide before New Zealand closed the border, and we decided to stay”.

Newell says in the clip, which you can watch above, that he’s been able to continue to work (remotely) as normal during his stay in New Zealand, and can “work [there] pretty much as effectively as I would if I were home”. However, he says it’s been tough “being worried about friends and family who aren’t in New Zealand.”

On the topic of why he’s loved being in the country, Newell says: “For me it’s very much about the community spirit – this sense that everyone can come together and solve this super-challenging problem, and then be welcoming to us, essentially, as COVID refugees. That, to me, has been extraordinary.

“There’s the natural beauty,” he adds, “there’s all the fun stuff you can do, but it’s the people that have really made our lives different.”