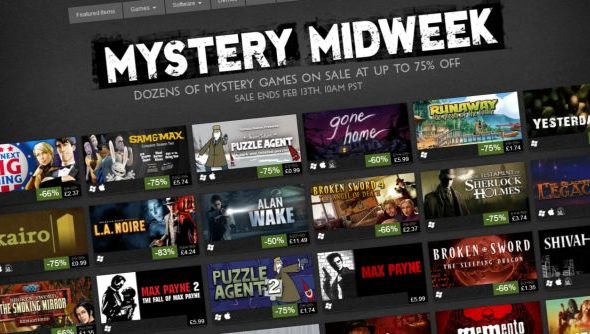 If you’ve visited the Steam store today, you’re likely to think there’s nothing out of the ordinary going on, but you’d be dead wrong. With a bit of detective work and some URL magic, it’s been revealed that Valve are holding a hidden Steam Sale, promoting “mystery” themed games by slashing their price by up to 75%.

Alan Wake, Gone Home, The Wolf Among Us and The Vanishing of Ethan Carter are just a few among the lineup.

Since there’s no obvious mention of it at all via Steam’s homepage – which I can’t figure out if it’s intentional or not – you’ll want to head over here to see the sale. There’s some almost criminal deals going on here, so my personal recommendations are many:

Home is a creepily cryptic thriller which had me on the edge of my seat for its entire two hour narrative. You awake in a strangers house with no recollection on how you arrived there. As you try and backtrack your whereabouts the night before, you ultimately (and subtly) change the games outcome based on your interpretations of events. For only £0.65/$0.98, it certainly would be a mystery if this isn’t in your Steam library by the end of the sale.

If you’re looking for a traditional detective game, then L.A. Noire is nothing but a safe bet. Set in 1940’s Los Angeles, you play as Cole Phelps – an LAPD detective tasked with weeding out the corruption that’s embedded in the city. If you’re interested in picking it up, be careful not to fall prey to the store page puzzle: you could pick the base game up for £4.99/$4.99, but you’d be silly not to instead purchase the L.A. Noire: Complete Edition for £4.24/$5.09, which includes all the DLC for the game.

What would you recommend picking up?