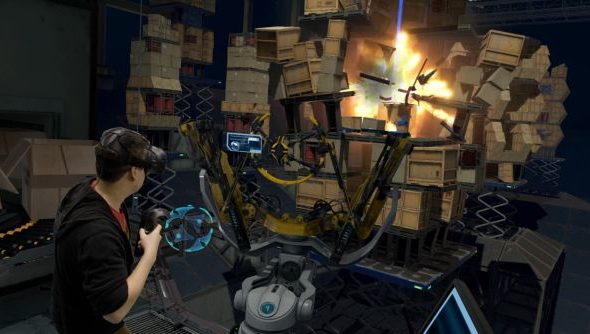 It’s an eternal PC gaming question: just what are Valve up to? Rolling around in their piles of money? Tweaking Steam? Building ever more impressive hat towers? What we do know they’re getting on with is VR, and a recent post on the Vive subreddit has revealed that a third of the company is now dedicated to that cause.

Here’s our picks for the best VR games so far.

Spotted by NeoGAF, developer Alan Yates was posting in reply to a thread about one of his tweets regarding VR his team was working on. In it he talks about the people that kept the idea of VR alive through the last couple of decades of uncertainty, and how the team at Valve grew.

“I was super fortunate to start at Valve right around the time Michael Abrash had begun the AR/VR research team,” he explains. “It was a much smaller team then than it is now, it has since grown to encompass about a third of the company, but the key individuals that solved most of the really hard technological problems and facilitated this generation of consumer headsets are still here working on the next generation.”

The thread poster on NeoGAF points out that the company is estimated to have around 380 employees, meaning around 120 working on VR. That may seem like a large team, but given games like WoW have teams of 300 on their own, plus the folks at Valve are helping to develop hardware solutions and software bases along with the actual games themselves, it’s fairly reasonable.

The question becomes: what are the other 200 or so folks up to? Let’s not actually say it, but think it all at once together in the hope that brings it into existence. All together now: Ricochet 2.