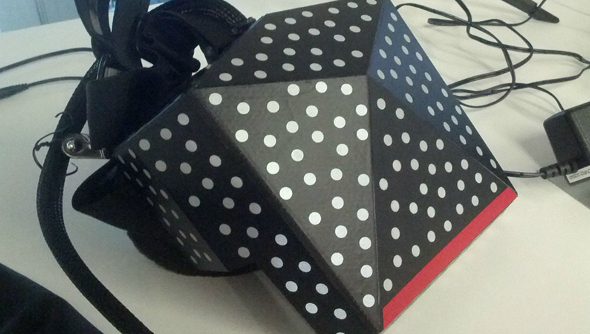 Valve’s gentle probing of VR has just been kicked up a notch. At GDC, next week, Valve will be revealing a “previously unannounced SteamVR hardware system” along with the new Steam Controller and devices for the living room.

Until now, SteamVR has just provided support for the Oculus Rift on Steam. It was released over a year ago in a sneaky patch. But now it’s looking like the foundation for Valve’s own VR bid. While the company originally said it was content with supporting developers like Oculus VR instead of developing its own VR tech, it did reveal a headset prototype last year (pictured above), suggesting that it was considering making a move.

And this might be it. Valve has even put the call out for VR creators on Steam.

“With the introduction of SteamVR hardware, Valve is actively seeking VR content creators. Are you a developer or publisher interested in experiencing the new SteamVR hardware? We’ll be giving scheduled VR demos during the week of GDC, March 4th-6th, 2015, at Moscone Center in San Francisco.

GDC kicks off next week.