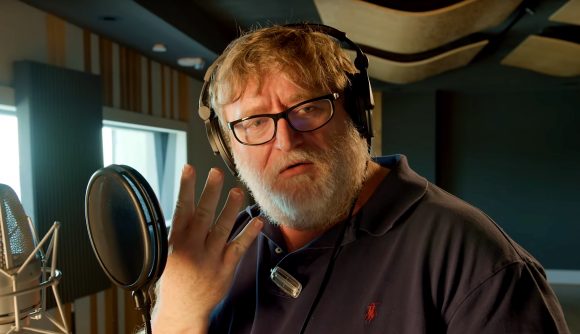 We’ve all heard the odd joke or two about the Half-Life 3 release date. You can see why – Half-Life: Alyx came out 16 years after Half-Life 2. In a recent interview with Edge (issue #344 via The Loadout) Valve boss Gabe Newell sheds some light on the long wait. Newell explains that Valve took a step away from single-player experiences like Half-Life to explore “more tractable experiences” like esports.

“We think esports is great, we love it, it’s growing super-fast – and these things take a long time,” Newell explains to Edge. “People have seen us sort of step away from immersive single-player experiences for a while, and a lot of that was that we saw more tractable experiences elsewhere.

“I mean, a typical gaming company would just keep cranking out sequel after sequel – but the reason people value Valve is that we’re supposed to be the ones picking interesting problems and solving them. It’s super exciting to be back in that space.”

As The Loadout notes, Newell’s soft spot for esports is visible through his numerous appearances at Dota 2’s The International event. While you may not see him as much during Counter-Strike: Global Offensive shows, it is notable that Valve gets involved with Valve-sponsored CS:GO Majors every year.

Luckily for Half-Life fans, though, the long wait for another entry in the long-running series was well worth it, even if it is a VR game. Dustin gave it a nine in his Half-Life: Alyx review, saying that it “confidently serves as both a vindication for the magic VR can bring to gaming, and a satisfying new entry in the beloved Half-Life series.”

There’s even some hope for the next Half-Life game, as Valve admits that working on Alyx reminded them just how fun it is to work on a Half-Life title. So you never know what the future will bring, we only need to wait and see.