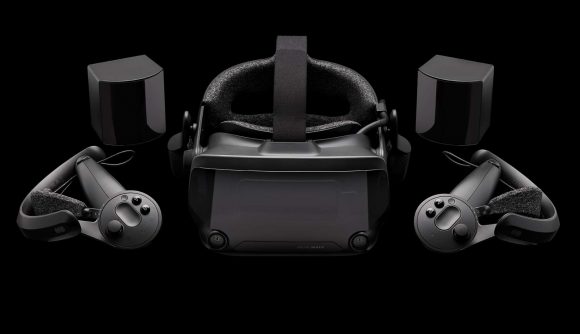 Valve Index headsets may be restocked this Monday, March 9, rumours suggest. While still unconfirmed, eager VR enthusiasts (and diehard Half-Life fans waiting on Half-Life: Alyx) are already planning out their checkout journey in order to grab the best VR headset going before it sells out once again.

Stock reportedly won’t last for long according to a tweet by Steam Database (via Rock Paper Shotgun). But I doubt you need any convincing of that. The moment Valve announced Half-Life: Alyx – a prequel to the events of Half-Life 2 through the eyes of series favourite Alyx Vance – avid fans were rushing to the Steam Store to pick up the company’s maiden VR headset.

Index sales quickly rose to near-Oculus Quest and PSVR quantities at around 103,000 units in Q4, no small feat in itself, yet fell just short as Valve’s warehouses were quickly left bare. Since then the Index has been listed as out of stock, with only a tantalising promise from Valve of maybe some stock returning this side of Half-Life: Alyx’s release date.

We’ve still no official word on Valve Index stock returning, only the vague promise via a third-party. If the rumour proves true, we’re sure to hear more from Valve before stock is set to return – whenever that may be. If you want to be the first to know when the time comes, you can sign up for notifications on the Valve Index Steam Store page right now.

Valve Index VR kits will be available for purchase on March 9th starting at 10 AM PDT (5 PM UTC).

Due to high demand, Valve expects available stock to sell out on Monday.#HalfLifeAlyx #ValveIndex #VR #VirtualReality

There’s also plenty of other Half-life: Alyx compatible headsets to choose from, including the HTC Vive and Vive Cosmos, Oculus Rift and Rift S, and most Windows Mixed Reality sets.

Half-Life: Alyx is set to release on March 23, 2020. Still plenty of time to pick up a compatible headset (maybe even a Valve Index if you’re quick and this isn’t total BS) and ensure your gaming PC is up to the Half-Life: Alyx system requirements.