After years of handheld gaming PCs like the Aya Neo coming out of the woodwork, Valve has thrown its hat in the ring with the Steam Deck, hitting shelves in December. There are three models to choose from ranging between $399 and $649, all of which take design cues from the Nintendo Switch.

It’ll use SteamOS, just like the ill-fated Steam machines, but Valve emphasises that this is a proper PC in all but shape. It comes with a full desktop Linux distribution behind the SteamOS skin, and you’ll be able to install Windows to the device for compatibility with more of the best PC games.

Under the hood, it’s powered by a custom AMD APU combining the Zen 2 and RDNA 2 platforms – the latter being the same architecture found on team red’s best graphics card. While Valve hasn’t divulged into benchmarks, it claims it has “more than enough performance to run the latest AAA games”. And, with the purchase of an additional dock, you can use it just like you would a normal computer, plugged into a keyboard, mouse, and monitor on the best gaming desk.

Here’s all we know about the Steam Deck:

The Steam Deck will begin shipping in December this year, but you can reserve one of the three models from July 16, for a small fee of $5 / £4. Once stock of the device is available, Valve will then send out notifications to those who have reserved a model to purchase. 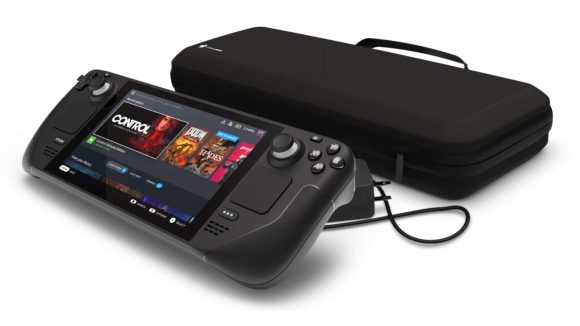 The most-expensive model also uses a different anti-glare screen, which could make it a better choice for outdoor play. 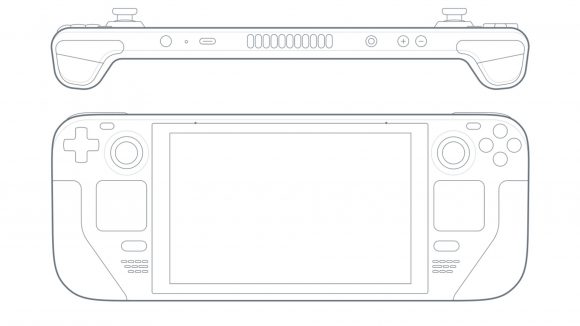 No matter which model you go for, you’ll be getting the same performance inside games. The APU includes a four core, eight thread Zen 2 CPU running at a base clock of 2.4GHz and a 3.5GHz boost clock, along with an RDNA 2 GPU chip, for a combined power of two teraflops according to IGN. There’s also 16GB of LPDDR5 RAM, which should future-proof the device nicely.

It uses a 7-inch IPS touchscreen with a 1280×800 resolution and a maximum refresh rate of 60Hz. While colours won’t pop as much as the panel on the upcoming Switch OLED, it’s still good news for great viewing angles. 400 nits of brightness should be great for outdoor gaming, as the Switch Lite boasts 380 nits.

It features all the buttons you’d expect to find on the best PC controller, along with motion controls and two track pads, which should make it easier to navigate the operating system or play RTS games.

Boasting two teraflops of power, the Steam Deck is on-par with the PlayStation 4, which doesn’t sound that impressive until you think that this is like taking a PS4 on-the-go – minus the Sony exclusives. The Steam Deck only targets 720p at no more than 60Hz, so it should be up to the job. We’ll have to wait and see what games it’s capable of running, however, as it might not fare well against the likes of Cyberpunk 2077.

It charges via USB Type-C, and it’s something you’ll be doing often. Despite the APU’s relatively low 15W power consumption, Valve quotes a battery life during gameplay of somewhere between two and eight hours, depending on how demanding the game you’re playing is. This is quite a bit lower than the Nintendo Switch’s four-and-a-half to nine hours estimated battery life.